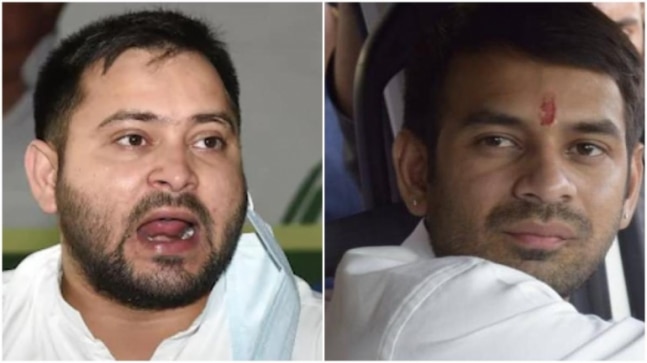 As RJD supremo Lalu Prasad Yadav’s tenure as national president of the party ends in November, there are reports of a power struggle between his two sons – Tejashwi Yadav and Tej Pratap Yadav.

Tejashwi Yadav, Leader of Opposition in the Bihar Assembly, is being seen as the inheritor of the party if Lalu Prasad Yadav decides not to contest the election due to his poor health. However, Tej Pratap is also keen on throwing his hat in the ring.

Reports stated that Tejashwi Yadav and Tej Pratap are both eyeing the post.

Is all not well between Tejashwi Yadav and Tej Pratap?

The developments in the last two days at the party headquarters in Patna show all may not be well between the two brothers.

On Sunday, a controversy erupted when a Chhatra RJD event was held at the party headquarters where Tej Pratap Yadav is a patron. On this occasion, posters were put up at the party office with pictures of Tej Pratap along with Lalu Prasad and former chief minister Rabri Devi. But, Tej Pratap’s younger brother Tejashwi Yadav was missing from these posters.

After the end of the event, Tej Pratap’s face in the posters was blackened by unknown people. Following this, Tej Pratap’s hoarding was brought down overnight and replaced with a new hoarding of Tejaswi Yadav.

Lalu Prasad Yadav and Rabri Devi, however, remained the common faces in this poster war.

RJD spokesperson Shakti Singh Yadav said that there was no power struggle between the two brothers and what happened on Sunday was merely a human error.

“There is no power struggle between the two brothers. Tej Pratap had once again said that Tejashwi Yadav was his Arjun and the future chief minister. The real power struggle is on in Janata Dal (United),” RJD’s Shakti Singh Yadav said.

“Power struggle in Lalu Prasad Yadav family is common. Lalu’s daughter has also started taking interest in politics and is regularly tweeting. She is giving competition to her elder sister Misa Bharti as she is also eyeing a Rajya Sabha seat. Similarly, a power struggle is going on between Tej Pratap and Tejashwi Yadav ahead of the RJD national president election,” JD(U) spokesperson Abhishek Jha said.