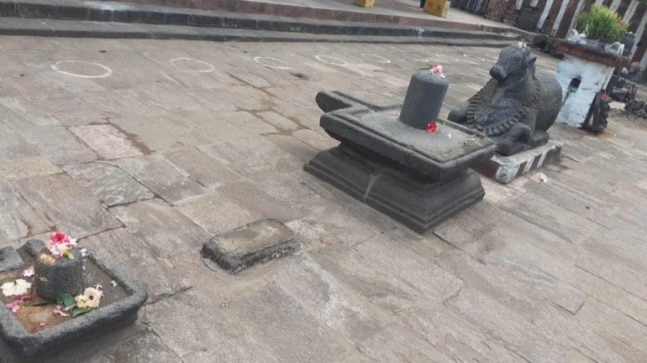 An ancient Nandi idol dating back to the Chalukya era has gone missing from a temple in Andhra Pradesh, prompting BJP to blame the ruling YSRCP for negligence. The Nandi idol has gone missing from this temple in Andhra Pradesh.

An ancient Nandi idol dating back to the Chalukya era has gone missing from a temple in Andhra Pradesh, prompting BJP to blame the ruling YSRCP for negligence.

The idol of Lord Nandi was stolen from the historic Golingeswara Swami Temple in East Godavari district. The idol hails from the Chalukya dynasty era that ruled the southern states between the 6th and 12th centuries.

While the well-known Nandi idol was found missing on Friday, the temple authorities approached the police only after a hue and cry by devotees. After noticing that the idol is missing, locals and devotees started demanding an investigation.

The Golingeswara Swami Temple in Bikavolu of East Godavari district was built during the reign of the Chalukyas and is located 33 km from Kakinada.

Bikavolu is known for its stone temple of Lord Shiva that was built by the Chalukyas in the 9th-10th centuries. A stone sculpture of Ganesha in this region has become a masterpiece of Chalukyan craftsmanship.

The Nandi idol going missing from the temple has now triggered a political with BJP lashing out at YSRCP over multiple cases of theft and vandalism at temples.

Andhra BJP leader Vishnu Vardhan Reddy has questioned the government, citing the incidents of a temple in Srikakulam being vandalized on Sunday.

“After the YSRCP government came into the ruling, there are hundreds of attacks on Hindu temples and idols like Ramatheertham or Antharvedi. Unfortunately, it has failed to protect Hindu culture but is busy appeasing Christians and Muslims in the state,” said Reddy.

Meanwhile, police have launched an investigation into the theft case at the East Godavari temple and vandalism at the Srikakulam temple.