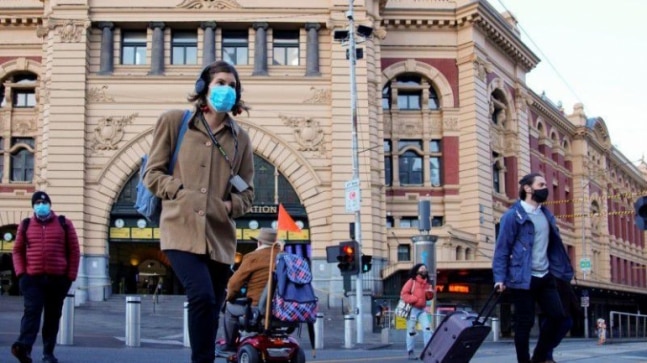 Australia’s Victoria state registered 20 new locally acquired cases of coronavirus on Wednesday. In view of surge in cases, the authorities are mulling the extension of lockdown restrictions to control the spread of virus. Victoria was plunged into its sixth lockdown since the pandemic began on Aug 5, just weeks after exiting its last. (Photo: Reuters)

Australia’s Victoria state reported 20 new locally acquired cases of COVID-19 on Wednesday, a steady rate of increase, as officials consider whether to extend a snap one-week lockdown in Melbourne.

Six of the diagnosed people spent time in the community while infectious, a key measure that officials have said needs to be close to zero before lockdowns in both Melbourne and Sydney can be lifted.

The Herald Sun newspaper reported that Melbourne restrictions could remain until at least early next week, without citing sources.

Victoria was plunged into its sixth lockdown since the pandemic began on Aug 5, just weeks after exiting its last.

Neighbouring New South Wales is bracing for a rise in infections in Sydney a day after Australia’s largest city reported a daily record of 343 cases. Of the cases reported on Tuesday, at least one-fifth were in the community while infectious.

The Delta variant outbreak, which started in Sydney, has spread to other regions of the state, sparking more local lockdowns, including in the popular tourist spot of Byron Bay.

Two schools in Dubbo, about 400 km (248 miles) northwest of Sydney, were ordered to close on Wednesday.

Australia has so far fared much better than many other countries in the developed world during the pandemic, with just under 37,000 COVID-19 cases and 942 deaths.

However, the lockdowns in its two largest cities are derailing the country’s plans for an economic rebound from the pandemic, with some economists forecasting its second recession in as many years.

Victoria state authorities lifted restrictions in regions outside Melbourne earlier this week after a slowdown in new cases.