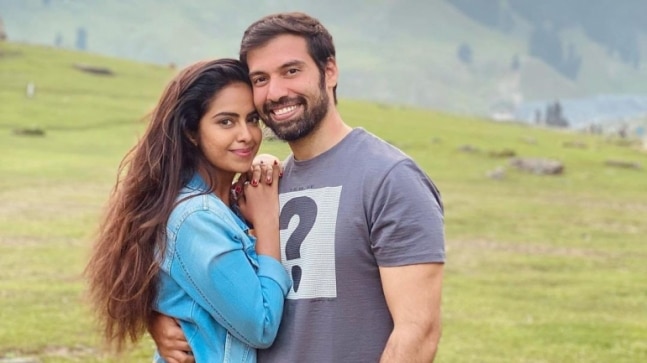 Avika Gor is in a happy space right now with her boyfriend Milind Chandwani. The couple has completed two years of their relationship now and they are celebrating it together by holidaying in Sonamarg, Jammu and Kashmir. The Balika Vadhu fame actress took to social media to share a loved-up picture with her beau. She also penned a beautiful note thanking Milind for believing in her and pushing her to see beyond. Avika also said that she feels blessed with him.

Avika Gor and Milind Chandwani often share loved-up posts for each other on Instagram. They are celebrating two years of their love now. To mark the special occasion, they flew to Kashmir from where Avika shared an adorable picture. In the photo, the couple is seen posing for the camera while hugging each other. Along with it, the actress wrote, “2 years of knowing this human! My human! My life is filled with utmost Joy & Love because of you! @milindchandwani Thank you for making me believe in myself. Thank you for being Shiroo’s favourite! (I’m still trying to make peace with that) I love you for the person you are that pushes me to see beyond! You encourage me to grow every single day! I’m so blessed. I promise to celebrate every moment with you (sic)!”

HOW DID MILIND CHANDWANI REACT?

Milind Chandwani commented on Avika Gor’s post saying, “Awwww. I love you, beautiful! Thanks for making my heart full! Shiroo’s love for me is beyond our relationship (sic)!” WHO IS MILIND CHANDWANI?

Milind is an IT professional-turned-social activist. While he was at the TV reality show Roadies Real Heroes, he was liked by all for his kind-hearted nature. Milind started his NGO Camp Diaries and has been actively working towards the education of kids. Camp Diaries is a non-governmental organisation that works towards giving kids from government and/or low-income private schools exposure in 8 different extra-curricular and co-curricular activities.

WHEN AVIKA SHARED HER LOVE STORY

Avika and Milind met for the first time at a get-together in Hyderabad. Avika liked him instantly. Speaking about the same, Avika told Saas, Bahu Aur Betiyaan earlier, “It was not like love at first sight but yes it was me who expressed her feelings first. Just like South films where the actress expresses her feelings for the hero and then the hero realises his love for heroine, that is exactly what happened with me and Milind.”

Apart from Balika Vadhu, Avika is known for her performance in Sasural Simar Ka where she played the double role of Roli Dwivedi Bhardwaj and Jhumki. She has also worked in Telugu films, which includes Uyyala Jampala, Cinema Choopistha Mava and Raju Gari Gadhi 3. In 2019, the actress participated in Fear Factor: Khatron Ke Khiladi 9 as a contestant.

ALSO READ I Balika Vadhu to return with new season? Here’s what Avika Gor, Smita Bansal have to say