Bajrang Punia, his coach and his father were carried on people’s shoulders as he arrived at the New Delhi airport from the Tokyo where he won a bronze on Olympic debut. 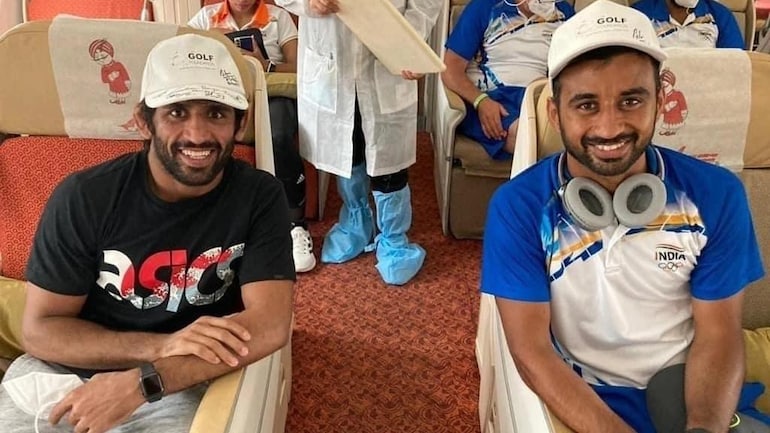 Wrestler Bajrang Punia was lifted on people’s shoulders amid a festive reception at the New Delhi airport on Monday as he arrived from the Tokyo Olympics. Bajrang, who won bronze on Olympic debut in Tokyo, said amid the celebrations that he will be looking to work on his drawbacks to get a better result next time.

“It feels so good, of course I feel very happy, so much love is being showered on us by the people. Will be working hard a lot. Whatever weaknesses are there we will be working on it,” said Bajrang.

Bajrang, his Georgian coach Emzarios “Shako” Bentinidis were carried on shoulders of people as soon as they got out of the airport.

India’s medalists from the Tokyo Olympics campaign were given a festive reception in New Delhi as they made their way out of the airport on Monday afternoon. Javelin star and gold medalist Neeraj Chopra was one of the first athletes to come out and was immediately mobbed by hundreds of fans. Neeraj was actually struggling to go through the crowd as everyone wanted to catch a glimpse of the javelin gold winner.

Thousands of fans waited outside the airport to welcome wrestlers Ravi Kumar Dahiya and Bajrang, boxer Lovlina Borgohain and the men’s hockey team, who arrived from Tokyo earlier in the day.