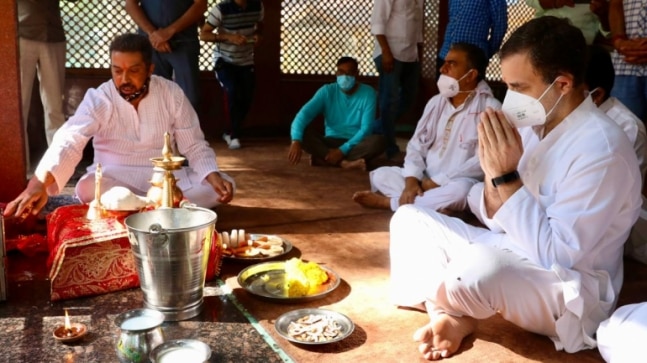 A day after the killing of a BJP sarpanch and his wife in Kashmir, the party has linked Congress leader Rahul Gandhi’s visit to the deaths. Ghulam Rasool Dar, a BJP member, and his wife were gunned down on Monday in Jammu and Kashmir’s Anantnag.

Hitting out at the Congress leader, Anil Gupta said, “The BJP leader and his wife were killed in J&K Congress chief GA Mir’s area on a day when Rahul Gandhi arrived in Srinagar. Is it just a coincidence?”

Dar and his wife were killed allegedly by two Lashkar-e-Taiba terrorists who barged into their Anantnag residence and sprayed them with bullets. The latest killings pushed the number of BJP workers killed in the Valley this year to four.

The BJP leader claimed that there was a “Pakistan-Congress nexus”. He said, “There could be a link between Rahul Gandhi’s visit to Kashmir and the killing of the BJP sarpanch.”

“I may be wrong, but in the past, Hafiz Saeed had said that the Congress party is good for them,” Gupta said.

Rahul Gandhi arrived in Srinagar on a two-day Kashmir trip on Monday evening. Rahul Gandhi visited the Kheer Bhawani temple in Ganderbal district of Jammu and Kashmir. He reached the temple nestled in the mighty chinars in Tullamulla area of the district early Tuesday morning.