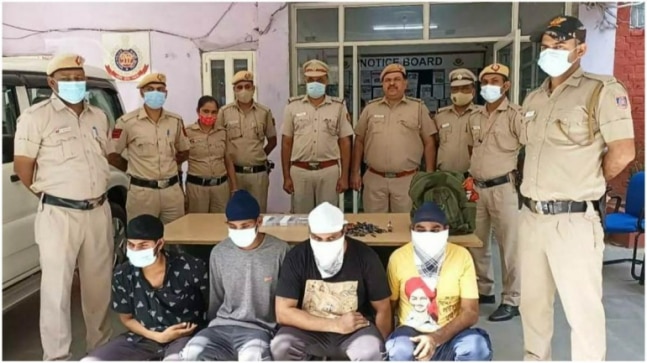 On Tuesday, the police team conducted raids and arrested the gang leader, Sikandar Singh, and his three associates, who were identified as Nishan Singh, Balveer Singh and Darpan Singh. (Photo: India Today)

Four members of the notorious ‘chabi wala’ gang were arrested by Delhi Police on Tuesday. The detained persons were each other’s relatives but were living in different states. The ‘chabi wala’ gang is known for stealing women’s jewellery.

The police got hold of the four ‘chabi wala’ gang members after a businessman in Delhi’s Shastri Nagar, Sarai Rohilla, complained that on July 27, 2021, three-four key makers had stolen jewellery from his house.

The complainant said that he had called them to fix the lock of the main gate of his house. The businessman was asked to provide his almirah key for repairing the lock of his main gate. But, after the key makers had left, he found that gold ornaments worth over Rs 30 lakh were stolen from his almirah.

The police eventually figured out that they belonged to the notorious ‘chabi wala gang’. On Tuesday, the police team conducted raids and arrested the gang leader, Sikandar Singh, and his three associates, who were identified as Nishan Singh, Balveer Singh and Darpan Singh. They were apprehended from a hotel in Pahar Ganj. Purportedly, they were trying to flee from Delhi to their native places in Madhya Pradesh, Maharashtra and Gujarat.

With sincere efforts from the police, gold jewellery items worth around Rs 30 lacs, that is 95 per cent of the stolen property, were recovered from their possession. Two old pedal bicycles were also recovered at the instance of accused persons, which were used in crime.

This gang generally targets the ladies, especially housewives who use golden or valuable ornaments. It is imperative to mention here that the accused persons are experts in duping expertise housewives and domestic women. However, in the present case, they duped a male and stole jewellery.

The accused persons are known to ride pedal cycles while roaming in the area to choose a target so that no suspicion arises. They stay at hotels and leave cities immediately after committing crimes.