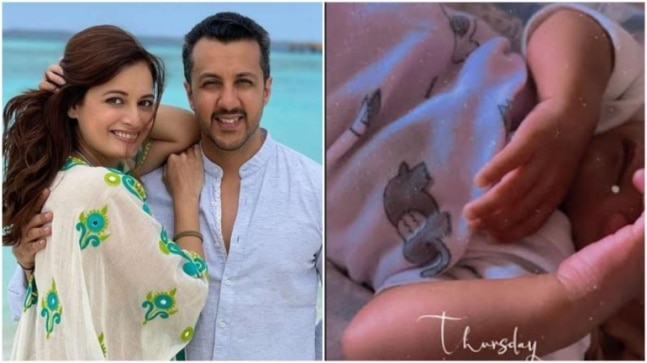 On World Elephant Day today (August 13), Dia Mirza shared the first picture of her and Vaibhav Rekhi’s son Avyaan. While the baby’s face is not visible in the photo, one cannot miss the cute onesie that he is wearing. The onesie has small elephants printed on it. Dia and Vaibhav welcomed their son Avyaan on May 14. However, they announced that they had been blessed with a son on Instagram two months later.

Dia Mirza shared a cute photo of her son Avyaan, who was born on May 14. In the photo, the star kid is seen wearing a cute elephant print onesie. However, his face is not visible in the photo. Sharing the photo, Dia wrote, “We are celebrating #WorldElephantDay (sic),” followed by earth, elephant and sun emojis. 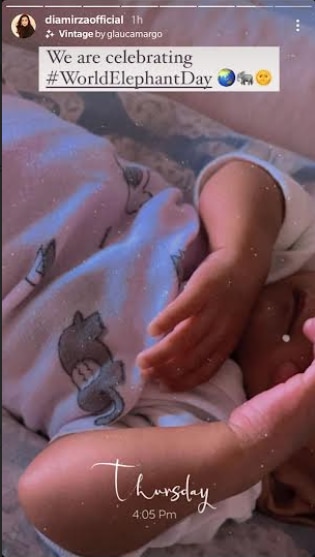 WHEN DIA AND VAIBHAV ANNOUNCED THE BIRTH OF THEIR BABY BOY

On July 14, Dia Mirza and Vaibhav Rekhi took to social media to announce the birth of their son. They also revealed his name, Avyaan. Paraphrasing an Elizabeth Stone quote, Dia wrote, “To have a child is to decide forever to have your heart go walking around outside your body (sic).”

Dia’s son Avyaan Azaad was born on May 14 prematurely. Thanking the medical staff who took care of the little one, Dia wrote, “These words perfectly exemplify Vaibhav & my feelings right now. Our heartbeat, our son Avyaan Azaad Rekhi was born on May 14th. Having arrived early, our little miracle has since then been cared for by tireless nurses and doctors in the Neonatal ICU (sic).”

“A sudden appendectomy during my pregnancy and a subsequent and very severe bacterial infection could have led to sepsis and proven to be life threatening. Thankfully, the timely care and intervention by our doctor ensured the safe birth of our baby via an emergency C-section (sic).”

DIA AND VAIBHAV TIED THE KNOT IN AN INTIMATE WEDDING CEREMONY

Dia Mirza and Vaibhav Rekhi got married in an intimate ceremony on February 15. Their wedding was attended by a few close friends and family members. Pictures from the wedding went viral. Dia wore a beautiful red saree for her wedding, which took place at the premises of her building.