Following his teary-eyed departure from FC Barcelona, Lionel Messi signed a two-year contract with French football giant Paris Saint-Germain, popularly known as PSG. Hundreds of PSG fans had gathered at the Le Bourget Airport in Paris on August 10, 2021, to welcome the star footballer.

Among others, a video showing an aerial shot of a massive crowd is circulating on social media with the claim that these are PSG fans waiting to welcome Messi outside the Paris airport. Similarly, an image of a jam-packed street is also being shared with the claim, “This isn’t political rally but a crowd to welcome leo messi in Paris! THIS MAN IS BIGGER THAN ANY SPORT! -Captain”. India Today Anti Fake News War Room (AFWA) has found that the viral video is of people who had gathered to watch the National Basketball Association (NBA) finals in Milwaukee, United States. The viral image, on the other hand, shows a crowd gathered at the recent Lollapalooza Music Festival in Chicago.

Let us look into these claims one by one.

Upon closely observing the video in circulation, a board reading “The Mecca Sports Bar and Grill” can be seen outside a building. Using this clue, we did a keyword search and found that it is a sports bar in the Deer district area of Milwaukee city in Wisconsin state of US.

We compared a still from the viral video with an image of “The Mecca Sports Bar and Grill” posted on its official Facebook page. It is evident that the place is the same. Using VPN, we found that the video in question was recently posted on a TikTok account called “@deerdistrict”.

The NBA had also posted a similar video on its official YouTube channel on July 21, 2021, which can be seen below.

Thus, it can be said with certainty that the viral video is not from Paris but Milwaukee. Though we cannot be completely sure about the date when the video was filmed, but most probably, it is related to the recent NBA finals.

When social media danced to the wrong beats

Reverse-searching the viral image, we found it in an August 3 report by “Business Insider“.

As per this report, the crowd had come to attend the Lollapalooza music festival, which was held in Chicago, US, from July 29 to August 1. The image has been attributed to Colin Hinkle.

Speaking to “Business Insider”, Colin said the picture was clicked from the balcony of his house. 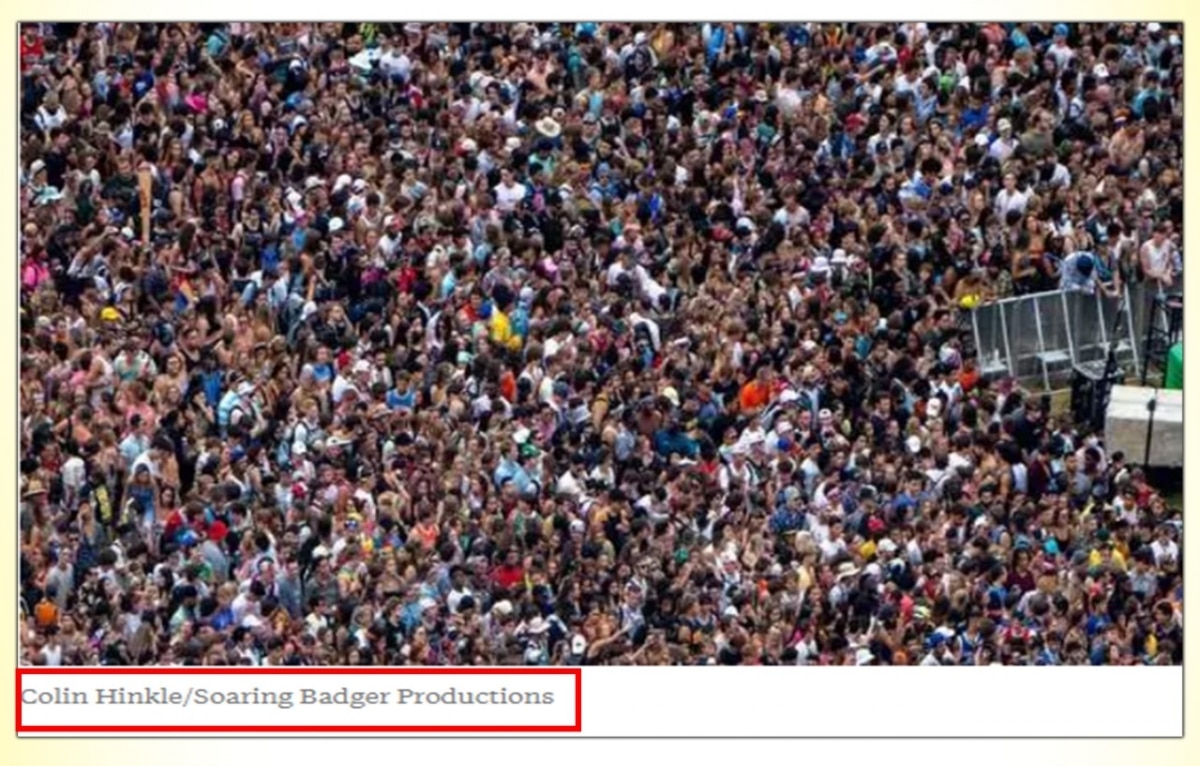 However, it is true that numerous PSG fans had queued up at Paris’s Le Bourget Airport ahead of Messi’s arrival. After landing in the French capital, Messi waved to his fans from a window at the Airport. Some visuals related to this can be seen in the below video report by AFP.

So evidently, images and videos of crowds from totally unrelated events are being linked to Messi’s recent arrival in Paris. ClaimPicture shows PSG fans who had gathered near Paris airport to greet Lionel Messi. ConclusionThe picture is of a crowd that had gathered at the Lollapalooza Music Festival, which was held in Chicago, United States, from July 29 to August 1, 2021.

The number of crows determines the intensity of the lie.