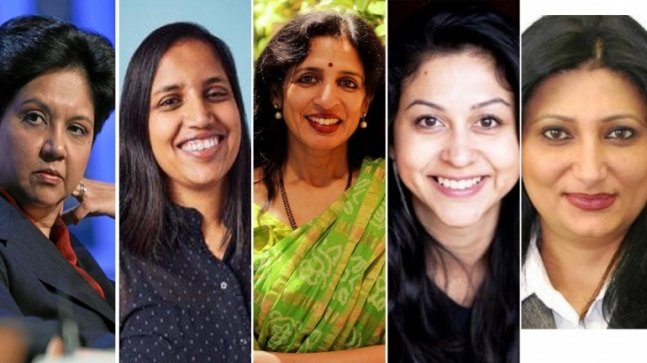 Five Indian-American women have been featured in the Forbes list of ‘America’s Richest Self-Made Women’ which was released on August 5.

This year, fifteen newcomers have been featured on the Forbes rich list, including PepsiCo’s former chair and CEO Indra Nooyi. Other Indian-Americans on the list include Jayshree Ullal, president, and CEO of Arista Networks; Neerja Sethi, co-founder, Syntel; Neha Narkhede, co-founder and former chief technology officer of Confluent; and Reshma Shetty, co-founder of Gingko Bioworks.

London-born Jayshree Ullal, 60, heads Arista Networks, a computer networking firm, since 2008. Ullal, who was raised in India, has a net worth of $1.7 bn and stands 16th on the Forbes rich list. According to Forbes, she owns about five per cent of Arista’s stock, some of which is earmarked for her two children, niece, and nephew.

Neerja Sethi stands at 26th place in the Forbes rich list with net worth of $1 bn. Sethi, 60, co-founded the IT consulting and outsourcing firm Syntel with her husband Bharat Desai in 1980 in their apartment in Troy, Michigan. French IT firm Atos SE bought Syntel for $3.4 billion in October 2018, of which Sethi got an estimated $510 million for her stake.

Neha Narkhede, who grew up in Pune, stands at 29th place in the Forbes rich list with net worth of $925 mn. Narkhede is co-founder and former chief technology officer of cloud company Confluent. As a LinkedIn software engineer, she helped develop the open-source messaging system Apache Kafka to handle the networking site’s huge influx of data.

In 2014, Neha Narkhede and two LinkedIn colleagues left to found Confluent, which helps organisations process large amounts of data on Apache Kafka. The company went public in June 2021 at a $9.1 bn valuation, of which Narkhede and her family own around 8 per cent, according to Forbes.

Reshma Shetty stands at 39th position in the Forbes rich list with net worth of $750 mn. Shetty, 41, co-founded Gingko Bioworks, a synthetic biotechnology company, in 2009 with four others, including her husband Barry Canton.

Reshma Shetty received a PhD in biological engineering at MIT, where she met Ginkgo Bioworks’ other co-founders. The company, named after a dinosaur-era tree, uses data analytics and robotics to speed up the process of discovering and making new organisms. It is slated to go public in a $17.5 billion SPAC deal, according to Forbes.

India-born Indra Nooyi stands at 91st position in the Forbes rich list with net worth of $290 mn. She served as CEO and chair of PepsiCo for 12 years before stepping down as CEO in 2018 and chair in 2019. Her fortune stems from stock she was granted while working there.

During her tenure, Indra Nooyi thwarted a bid to break up the company, nearly doubled sales to $65 billion and introduced healthier products and environmentally friendly practices, according to Forbes. She joined Amazon’s board in 2019.