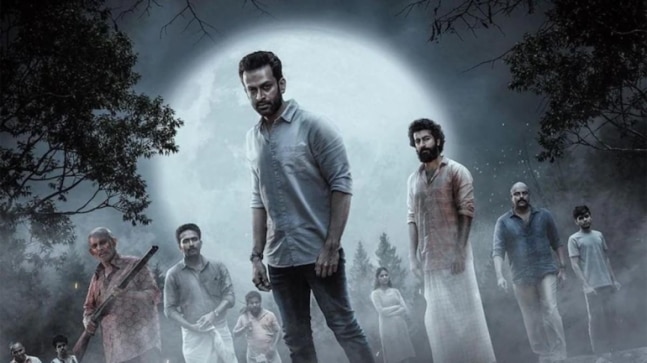 Prithviraj Sukumaran’s Kuruthi begins with a man trying to escape from the shackles of another man. There is a figure sitting on the bumper of the jeep looking at the scene unfolding in front of him and then the lights go out. This scene sets the pace for the audience to get a sense of what lies ahead in the film.

Ibrahim (Roshan Mathew) lives an ordinary life in Erattupetta, Kerala with his wife Zeenath, daughter Zuhru, his father Moosa Khader (Mamukkoya) and brother Resul (Naslen). During a landslide in the village, Ibrahim loses his daughter and wife. Their neighbour Preman’s (Manikandarajan) wife also dies in the landslide.

Fast forward a year and the whole village is reeling from the grief of losing their loved ones in the disaster. While Preman has taken to drinking, Ibrahim (Ibru) is unable to sleep with the memories of his family haunting him every day. Ibru questions his faith every moment and is unable to come to terms with why his wife and daughter were snatched from him so soon in life. Preman’s sister Sumathi (Srindaa) helps Ibru from time to time with household chores like washing the clothes and feeding the family.

On a fateful night, an injured cop, SI Sathyan (Murali Gopy), barges into Ibrahim’s house with a prisoner, Vishnu (Sagar Surya). With everyone locked inside the house, the question arises – how far will you go to save yourself.

Kuruthi takes us on a journey of self-reflection where we discover the seeds of hate sown in each of us throughout our childhood with respect to our ideologies, perspectives and our religion. When each of the 10 characters stuck inside the house is faced with the same dilemmas, their true nature and basic instincts kick in and the story that unfolds is an edgy thriller with unpredictable twists.

Prithviraj Sukumaran as Laiq, one of the 10 stuck in Ibru’s house that fateful night, is strong and unflinching in his ideologies and faith. From his red sneakers that symbolises blood to his expressions in each frame, Prithviraj owned the character. Though he is shown as a man of few words, his body language says it all. Laiq is ready to pay any price to stay true to his beliefs and what he feels is right.

Roshan Mathew as Ibrahim is a character to watch out for. The way his character develops and gradually changes throughout the film is a revelation. His innate need to save everyone against all odds makes him the one the audience roots for. From a loving father to a grieving widower, Roshan Mathew is perfect as Ibru.

His father, Moosa, might be a patient with a catheter, but when it comes to making the right call for his family, he stands tall and does what he deems best. Ibru’s friend Kareem (Shine Tom Chacko), who is also among the 10 stuck inside the house, does a great job at portraying how even friends can turn into foes in one night. Srindaa’s Sumathi is like any soft-spoken woman, who does everything for everyone around her. But she has her own views and when it comes to picking a side, she makes a choice not many would expect out of her.

Director Manu Warrier makes his Malayalam debut with this film and he knows exactly when to slow it down and when to step on it to speed the narrative. Cinematographer Abinandhan Ramanujam and editor Akhilesh Mohan have done an amazing job of creating the perfect frame for the film. Throughout the film, there is an eerie feeling that has been created by the use of lights. Most of the film is either shot during the night, dusk or dawn so that haunted feeling stays with you.

Kuruthi’s music, composed by Jakes Bejoy, adds life to the scenes. Be it Mankoodil that highlights the grief of a man who has just lost his family or Vetta Mrigam, which is all about survival, the lyrics by Rafeeq Ahammed and Suresh Hari will resonate with the audience.

In the end, the fast-paced thriller Kuruthi leaves us with a powerful message of why all of us have this lust for blood and why the fight of us vs them will always end in doom. Watch Kuruthi, which is releasing today on Amazon Prime Video as a gift to fans on Onam.