Failure has never been an option for India’s bronze medal-winning boxer Lovlina Borgohain – whether it’s against an opponent in the boxing ring or against some age-old patriarchy.

From the remote Bara Mukhiya Village in Assam’s Golghat district to cornering glory at the Tokyo Olympics, Lovlina Borgohain’s story is a testament to her character and courage that was on display even in her game in Tokyo.

The 23-year-old boxer returned with a bronze medal in the women’s 69kg welter-weight category. In the quarter-final, Lovlina was up against the former world champion Nien-Chin Chen of Taiwan, against whom Indian had suffered losses. But the pugilist from Assam was better prepared this time around. She has watched the videos of her previous bouts against Nien-Chen, which helped her during the medal bout.

“Isi ladki se 4 baar haar chuki hun (I had lost to her four times earlier), all I wanted to do was prove a point to myself by being fearless against her. I was just looking for revenge,” Lovlina told Indiatoday.In in a free-wheeling chat.

However, Lovlina’s quest for gold ended in the semi-final match against Busenaz Surmeneli of Turkey.

Up against quite literally a bully in the ring, Borgohain was completely out-punched by the eventual gold medallist Turkish boxer, who produced a thoroughly dominating performance.

What stood out in the semi-final bout was how Lovlina stood her ground and, against a relentless Surmeneli, never allowed her to settle down.

The flamboyant Turkish boxer didn’t just out-punch her rival after that but also taunted her with some showboating, including dropping her guard to dare the Indian. Lovlina managed to strike her only counter-attacking straight hits in the final round, but it was too late.

“I entered the ring to win the bout. However, during the bout, I realised that I might not be able to win it. But I didn’t wanted to quit, so I just kept on going till the last round. Unfortunately, I could not execute what I had planned. I could have done better,” said Lovlina.

‘Didn’t have an easy childhood’

Growing up, the pugilist has battled abject poverty and challenging conditions at his home to win an Olympic medal.

“I have faced a lot of difficulties since the time I have started boxing. It was not an easy childhood. My parents were exposed to scornful comments from society because they have three daughters,” recalled Lovlina.

“However, those who used to taunt my sisters and me are praising me. I am just glad that my medal has changed their mentality,” she added.

Lovlina’s journey to Tokyo Olympics has not been an easy one.

Lovlina’s mother, Mamoni Borhohain, underwent a kidney transplant last year. Lovlina visited her for a few days and ended up testing positive for Covid-19, a day before she was supposed to leave with the Olympic-qualified group for a 52-day training trip to Europe.

But even during the trying circumstances, Lovlina never gave up on her dream.

“For me, those were just hurdles. I knew that if I have to win an Olympic medal, I have overcome these obstacles. I stuck to my mantra — just keep fighting,” said Lovlina. 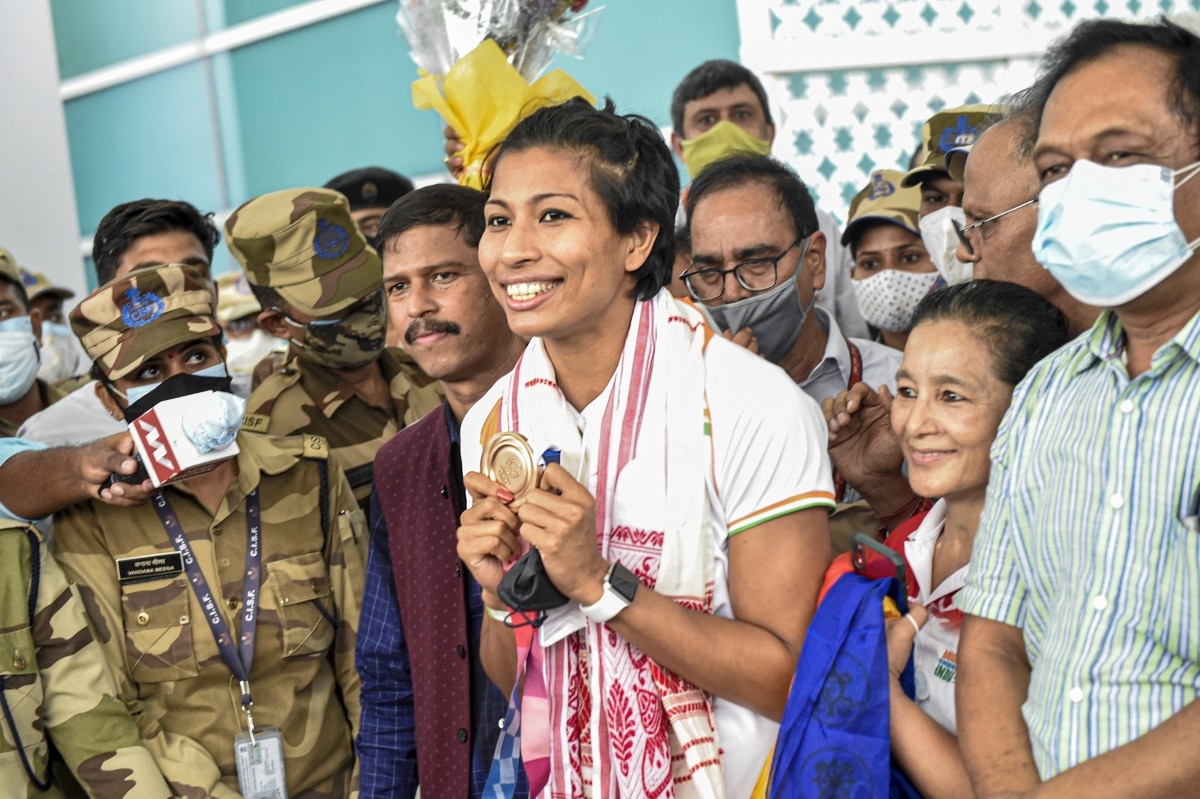 Lovlina was given a rousing welcome as she arrived home from Tokyo. Hundreds of people gathered at New Delhi’s Indira Gandhi International Airport to greet Lovlina and other members of the Indian Olympic team.

“Never in my wildest dream, I thought that I would receive such a reception. I was overwhelmed with the reception. I feel thrilled that I am getting so much respect from the people,” said Lovlina.

Despite her brave performance, which helped Lovlina to win a bronze at the Tokyo Olympics, the lanky boxer is not satisfied with her performance.

“Winning a medal in Olympics is special. I have dreamt of this day since the day I first started boxing. It has always been my goal.

“But my dream is unfulfilled. I failed to win the gold medal. I am not satisfied with my performance. The goal is to live my dream of winning the gold medal in the next Olympics,” Lovlina said.

It is going to be a long road for Lovlina to achieve that dream. First, she will have to prove her mettle in the World Championship, Commonwealth, and Asian Games in the next three years. But the welter-weight boxer knows the importance of patience and perseverance and that she is just off the blocks.