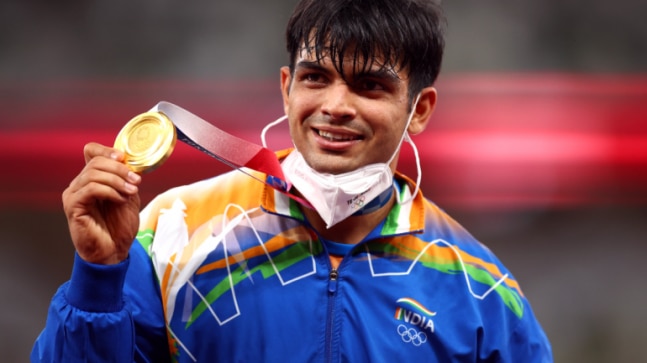 Neeraj Chopra’s native village Khandra in the Panipat town has become a national attraction after the athlete bagged the historic gold medal in the javelin at the Tokyo Olympics on Saturday. The javelin thrower’s gold medal at Tokyo Olympics has sparked a sudden interest in athletics as many in his village want to become the next Neeraj Chopra and win medals for the country.

Mostly under the age of 16, some 18 boys and girls together have started holding javelin sticks, a few from 2016 and a few from the last 3 months. Every evening at around 4 pm, many aspiring athletes can be seen practicing javelin followed by a long session of warm-up at the small playground of a private school Sanskriti located in the Khandara village.

16-year-old Yuvraj says, “after Neeraj bhaiya won the medal in 2012 games, that inspired me to be like him and I started practicing javelin. Whenever Neeraj Chopra comes home he always gives us expert tips in the javelin.”

Taking inspiration from Neeraj, another local resident 14-year-old Krish chose javelin instead of any other game. Krish says, “Neeraj bhaiya is our inspiration and we have seen him winning medals for the country. There are around 18 boys and girls in our village who want to become Neeraj Chopra and win a medal for the country.”

Dipika is also amongst the young athletes of Sanskriti schools. (India Today Photo)

Shivaji Stadium in Panipat town is the place where Neeraj dreamt of becoming a javelin thrower. After Neeraj Chopra’s success, many young boys and girls are aspiring to emulate Neeraj. 15-year-old Lakshya came to Shivaji stadium on Monday evening looking for a coach to learn javelin.

Lakshya says, “I want to learn javelin after I saw Neeraj winning gold in Olympic games. My parents also agreed and permitted me to learn the javelin. Neeraj Chopra has inspired me and that is why I have come to the ground looking for a coach to learn javelin.”

Coach Mahipal is busy teaching athletes the tricks and techniques as he says it is a proud moment for all of us. Coach Mahipal says, “Neeraj was twelve years old when he first came to Shivaji stadium to learn javelin I really feel proud as now he has won the medal for the country and made his state and country proud.

Coach Mahipal says after Neeraj Chopra’s success he has been flooded with the request of young athletes who want to become a javelin thrower and he will do his best to teach many and ensure India wins many gold medals.