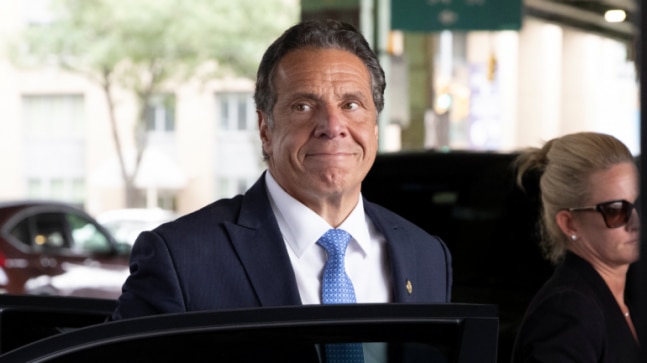 In a televised message, the 63-year-old Democrat said his resignation will be effective in 14 days.

“When I took my oath as GovernorI became a fighter, but I became a fighter for you. And it is your best interest that I must serve. This situation by its current trajectory will generate months of political and legal controversy. That is what is going to happen.”

“That is how the political wind is blowing. It will consume government. It will cost taxpayers millions of dollars, it will brutalise people,” he said referring to the sexual harassment allegations and case against him.

Cuomo said the State Assembly on Monday outlined the weeks of process that will then lead to months of litigation and “time and money that government should spend managing Covid-19, guarding against the Delta variant, reopening-up state, fighting gun violence, and saving New York City, all that time would be wasted.”

Cuomo said this is one of the “most challenging times” for government in a generation.

“Government really needs to function today. Government needs to perform. It is a matter of life and deathand wasting energy on distractions is the last thing that State Government should be doing.”

“And I cannot be the cause of that. New York tough means New York loving. And I love New York. And I love you. Everything I have ever done has been motivated by that love. And I would never want to be unhelpful in any way. I think that given the circumstances, the best way I can help now is if I step aside and let government get back to governing,” Cuomo said

He said the transition must be seamless and his lieutenant governor Kathy Hochul “can come up to speed quickly”.

He said the situation against him was politically motivated.

“I’m a New New Yorker, born and bred. I am a fighter and my instinct is to fight through this controversy because I truly believe it is politically motivated. I believe it is unfair and it is untruthful. And I believe it demonises behavior that is unsustainable for society.”

Cuomo said there is an intelligent discussion to be had on gender-based actions, on generational and cultural behavioral differences, on setting higher standards and finding reasonable resolution. “But the political environment is too hot, and it is too reactionary for that now. And it is unfortunate.”

After nearly five months, the investigators concluded that Cuomo “did sexually harass multiple women — including former and current state employees — by engaging in unwanted groping, kissing, and hugging, and making inappropriate comments,” James said in a statement.

The governor and his senior staff took actions to retaliate against at least one former employee for coming forward with her story. Cuomo’s Executive Chamber fostered a “toxic” workplace that enabled “harassment to occur and created a hostile work environment”.

“This is a sad day for New York because independent investigators have concluded that Governor Cuomo sexually harassed multiple women and, in doing so, broke the law,” James said. “I am grateful to all the women who came forward to tell their stories in painstaking detail, enabling investigators to get to the truth. No man — no matter how powerful — can be allowed to harass women or violate our human rights laws, period.”

The investigators found that Cuomo’s Executive Chamber was “rife with fear and intimidation” that not only “enabled the above-described instances of harassment to occur,” but also “created a hostile work environment overall.”

The investigation was conducted after, on March 1, 2021, the Executive Chamber made a referral for James to select independent lawyers to investigate “allegations of and circumstances surrounding sexual harassment claims made against the governor.”

Starting in December 2020, multiple women came forward with allegations that Cuomo sexually harassed them. Over the course of the investigation, the investigators interviewed 179 individuals, including complainants, current and former members of the Executive Chamber, State Troopers, additional state employees, and others who interacted regularly with the governor.

The Attorney General’s office said more than 74,000 documents, emails, texts, and pictures were also reviewed as evidence during the investigation.

“Backed up by corroborating evidence and credible witnesses, the investigators detail multiple current or former New York state employees or women outside state service who were the targets of harassing conduct on the part of the governor,” it said.

As part of the investigation, Cuomo also sat with the interviewers and answered questions under oath.

While the governor denied the most serious allegations, the investigators found that he did so by offering “blanket denials” or that he had a “lack of recollection as to specific incidents”.

The investigators also found that the governor’s recollection “stood in stark contrast to the strength, specificity, and corroboration of the complainants’ recollections, as well as the reports of many other individuals who offered observations and experiences of the governor’s conduct”.