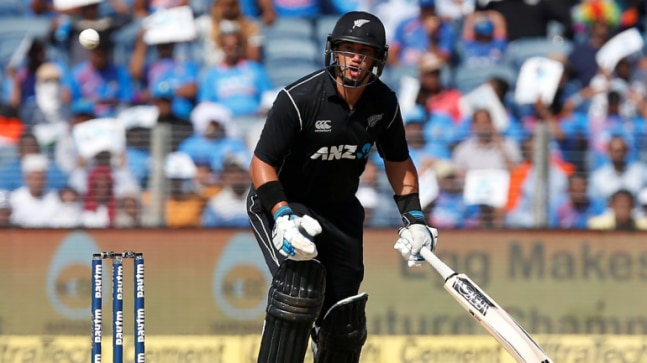 Ross Taylor, a veteran of 102 T20Is, has not featured for New Zealand in the shortest format since November 2020. (Reuters Photo)

Veteran batsman Ross Taylor and all-rounder Colin de Grandhomme have not been named in New Zealand’s 15-member squad for the ICC T20 World Cup, set to be played in UAE from October 17.

Spinner Todd Astle joins fellow legspinner Ish Sodhi and left-arm spinner Mitchell Santner for the Oct. 17-Nov. 14 tournament in the United Arab Emirates and Oman, where spin is expected to be important.

The batting lineup is settled with Tim Seifert opening and keeping wicket and Martin Guptill, Devon Conway and captain Kyle Williamson taking the other top-order roles.

New Zealand also has named squads to play five T20s in Bangladesh in early September and T20 and one-day series in Pakistan later that month. In total 32 players will be involved in the tours as New Zealand Cricket seeks to spread the workload, and the toll of travel and quarantine, on players and staff.

“The need to safeguard the well-being of our players and support staff is now very real and we’ve endeavored to do this by carefully managing their workloads over this winter’s massive playing program,” NZC chief executive David White said Tuesday. “I’m satisfied we’ve selected strong squads for all our touring commitments this winter.”

Williamson, Seifert, Boult, Jamieson, Neesham, Santner, Ferguson and Milne will be released to play in the Indian Premier League in late September and early October along with England-based Finn Allen, who has been named for the Bangladesh and Pakistan series.

“It’s a pragmatic approach,” White said. “We’ve always tried to be realistic about the IPL and this particular issue is very much a one-off, caused by a unique set of circumstances.”