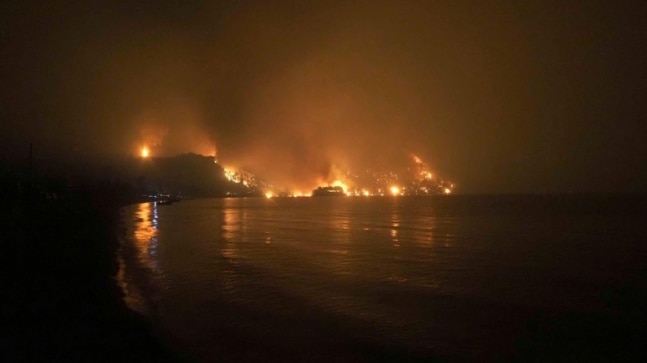 Robert Frost’s immortal verse “Some say the world will end in fire” has become the nightmarish reality for millions of people in Greece, where wildfires continued to blaze for the fifth day in a row, threatening whole towns and ripping a large island in half.

At present, there are three large wildfires tearing through Greece, a result of the worst heatwave in over three decades. Temperatures soared up to 45 degrees Celsius. One volunteer firefighter died Friday and at least 20 people have been treated in hospitals over the last week.

The biggest and so far uncontrollable blaze broke out on Tuesday on the country’s second largest island of Evia, east of Athens, burning through thousands of acres of pristine forest and isolating the northern part. 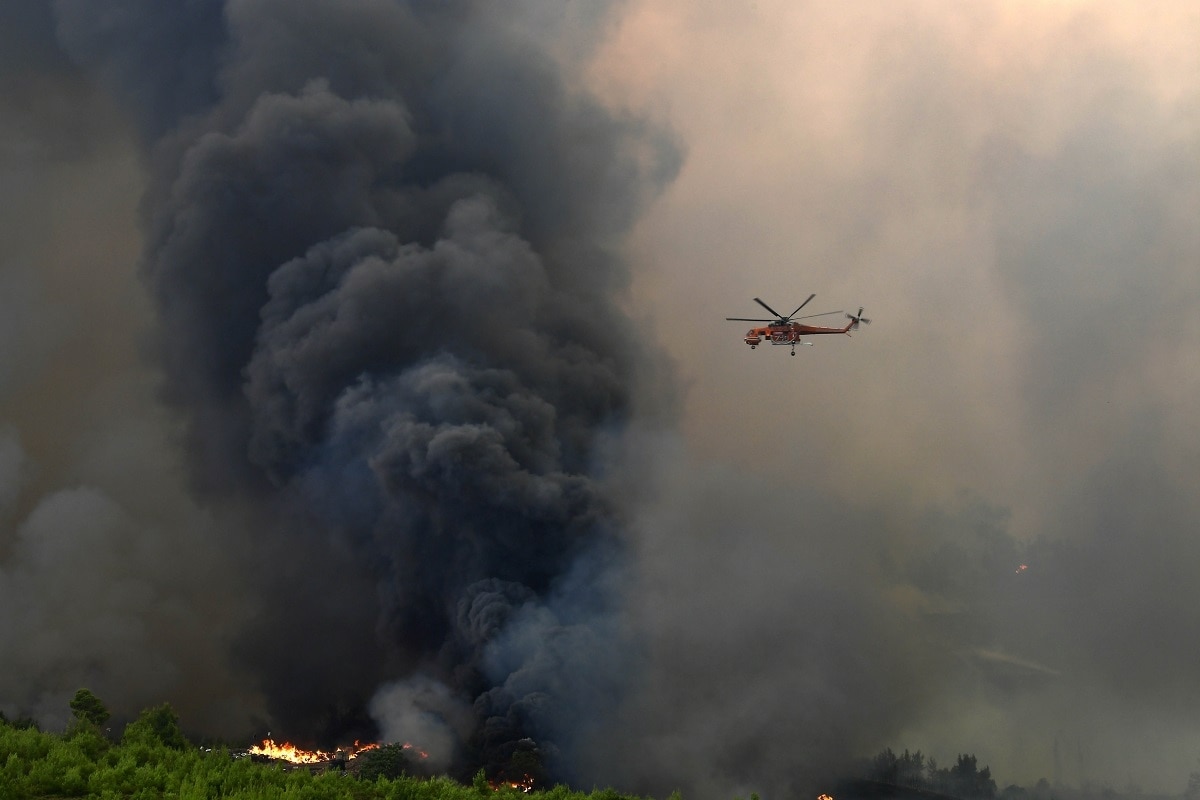 An helicopter operates over a wildfire in Agios Stefanos, in northern Athens, Greece (AP photo)

The other dangerous fires were one in the southern Peloponnese peninsula near Ancient Olympia — the site of the first Olympic Games– and one in Fokida, in the country’s central region, north of Athens. The fire in Ancient Olympia moved east, away from the ancient site, threatening villages in a sudden flare-up Saturday afternoon.

Prime Minister Kyriakos Mitsotakis called it a “nightmarish summer”, adding the government’s priority “has been, first and foremost, to protect human lives”.

Firefighters faced “exceptionally dangerous, unprecedented conditions” as they battled 154 wildfires (as of Friday), with 64 still burning into the night. 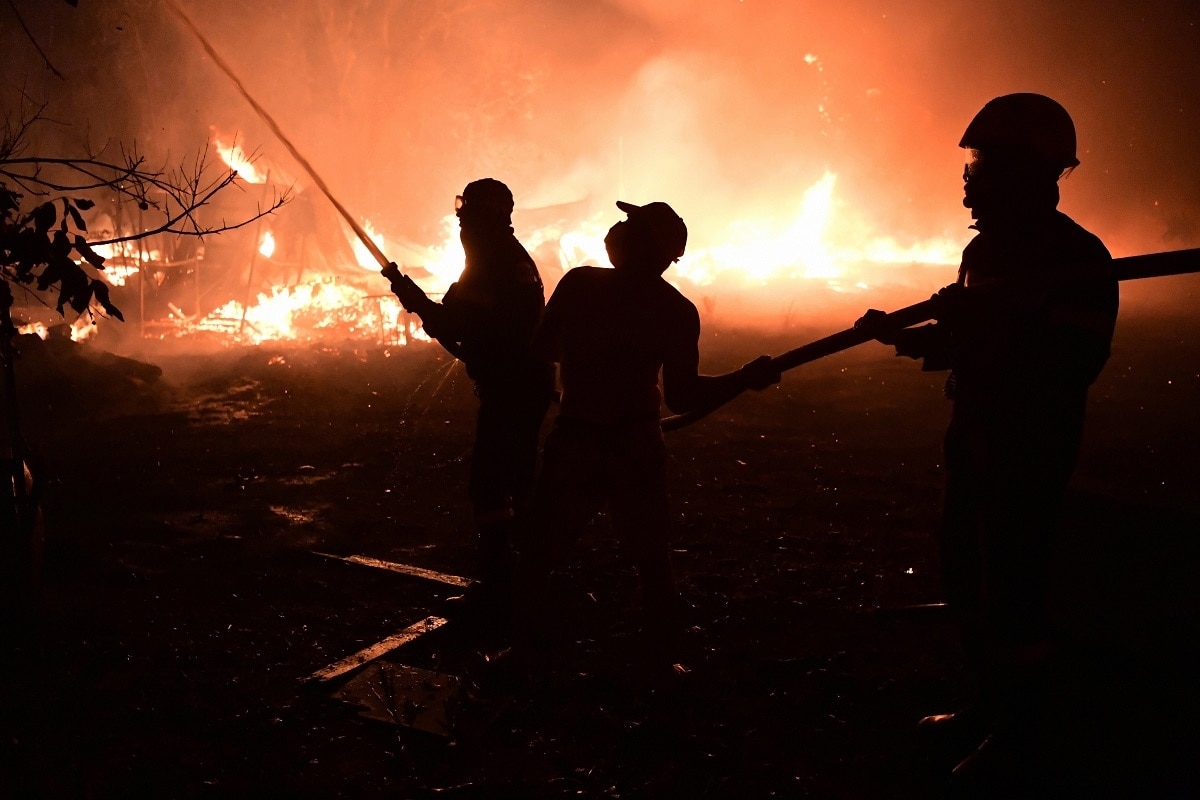 Firefighters and local residents try to extinguish the flames during a wildfire in Adames area, in northern Athens, Greece (AP photo)

Evacuation orders were issued for dozens of villages on the mainland and the nearby island of Evia, as well as outlying settlements on the forested fringes of Athens. Scores of homes and businesses have been destroyed or damaged, although authorities have been unable yet to provide detailed figures.

A local official in the Mani area of southern Peloponnese, south of Sparta, estimated the wildfire there had destroyed around 70 per cent of her area. 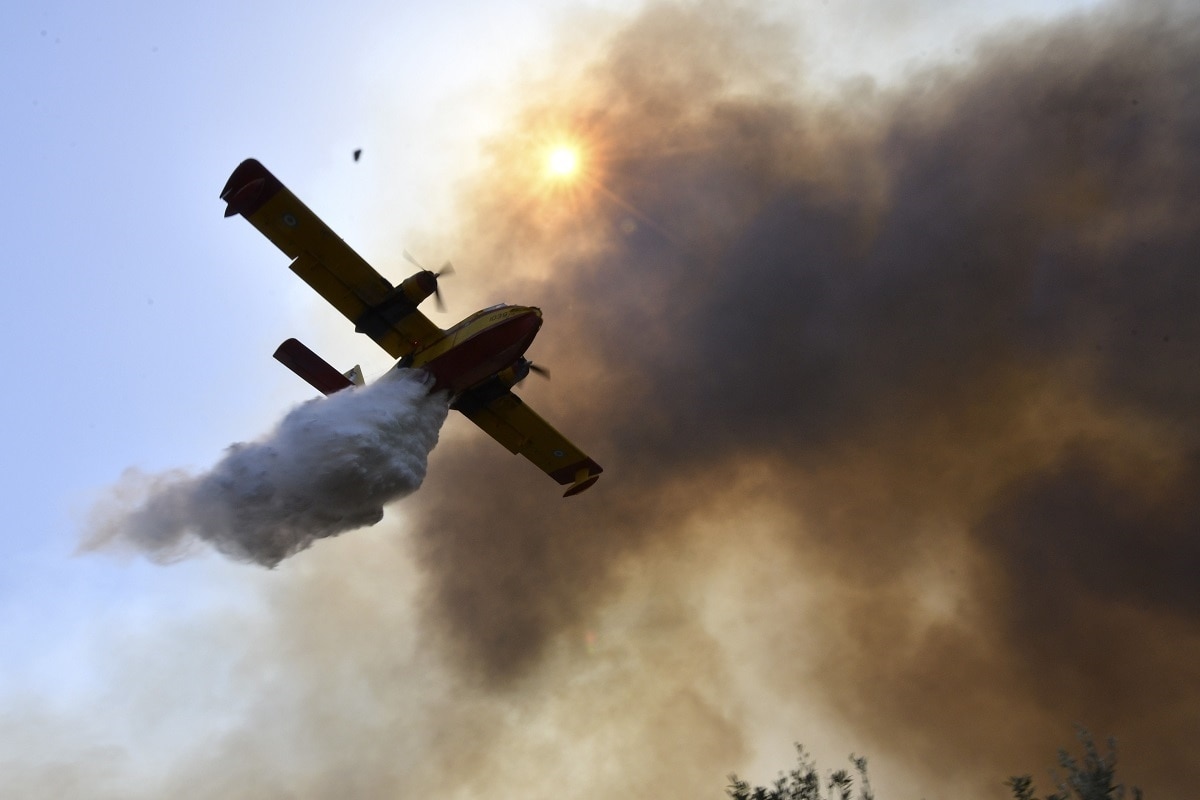 In dramatic sea rescues, more than 2,000 people, including many elderly residents, have been evacuated by ferries from Evia this week as the skies turned an apocalyptic red. 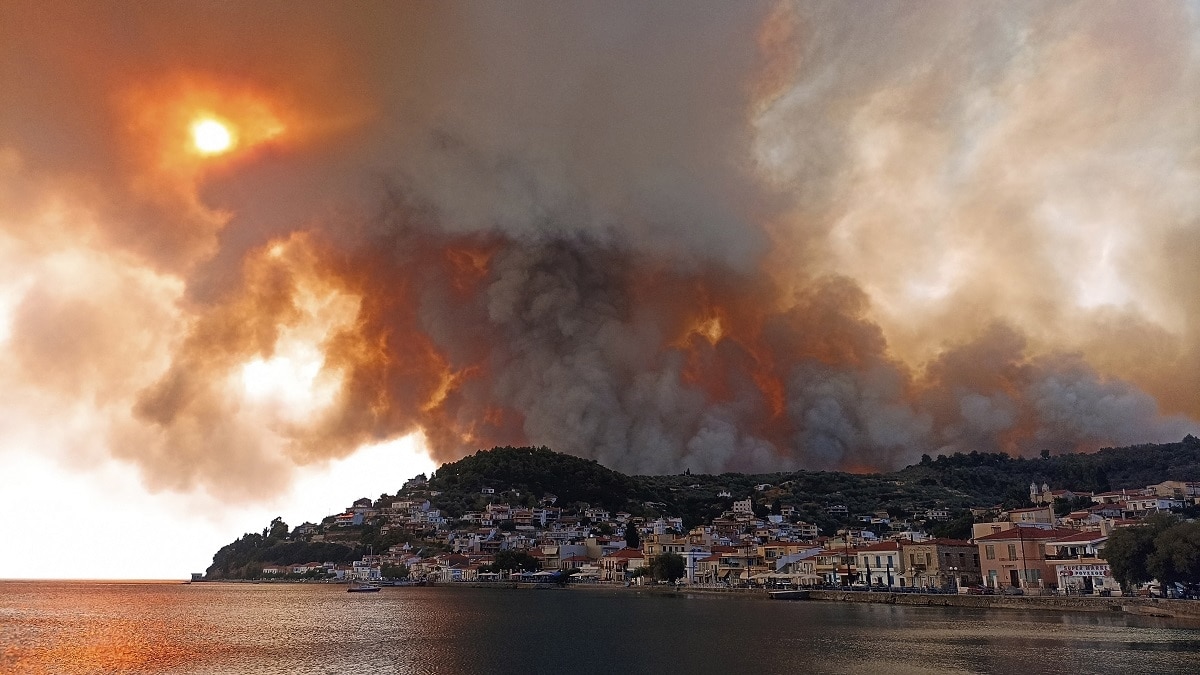 Flames burn on the mountain near Limni village on the island of Evia, Greece (AP photo)

A flotilla of 10 ships was mobilized to the seaside resort of Pefki, near the northern tip of Evia, to evacuate residents and tourists as flames consumed the island, cutting off other means of escape.

In Istiaia, a town of 7,000 in northern Evia, firefighters battled through the night to save townspeople and several villages, using bulldozers to open up clear paths in the thick forest.

Very apocalyptic video of people in Greece being evacuated from the forest fires by boat: pic.twitter.com/f9TxS9Hoe3

North of Athens, the fire on Mount Parnitha, a national park with substantial forests, was still burning with occasional flare-ups, but a Fire Service spokesman told the AP late Saturday that containment efforts were “going well.”

Smoke from that fire was still spreading across the Athens basin. Earlier, the blaze had sent choking smoke across the Greek capital, where authorities set up a hotline for residents with breathing problems.

Strong winds pushed a fire into the town of Thrakomakedones on the outskirts of Athens, where residents had been ordered to evacuate. The blaze left behind burnt and blackened houses and cars among scorched pine trees. A cloud of smoke hovered over the capital.

“(It’s) really bad,” said Thanasis Kaloudis, a resident of Thrakomakedones. “All of Greece has burned.” A burned car after a wildfire on the outskirts of Athens, Greece (AP photo)

Fires described as the worst in decades have swept through stretches of Turkey’s southern coast for the past 10 days, killing eight people. The top Turkish forestry official said 217 fires had been brought under control since July 28 in over half of the country’s provinces, but firefighters still worked Saturday to tame six fires in two provinces.

In Turkey’s seaside province of Mugla, a popular region for tourists, some fires appeared to be under control Saturday but the forestry minister said blazes were still burning in the Milas area. Environmental groups urged authorities to protect the forests of Sandras Mountain from nearby fires. Firefighters extinguish a fire in the Milas area of Mugla, Turkey on Saturday (AP photo)

Municipal officials in Antalya, on Turkey’s Mediterranean coast, said a wildfire was still burning around the Eynif plain, where wild horses live.

How can people still ignore the Fires in Turkey? You can literally hear the cries and screams of the animals burning. #helpturkey pic.twitter.com/qzUyfLD3h6

(With inputs from Associated Press and Reuters)