The Perseid meteor shower, one of the most-watched spectacles of the year, returns to the skies every August and is best viewed in isolated areas with little or no light.

According to Nasa, Perseids offer the best chance to see a meteor shower from Earth because of the sheer number of meteors passing every hour — 100-120 per hour.

The Perseid meteor shower will peak on August 11, 12 and 13, and the best time to watch will be between midnight and dawn on these days. According to Earthsky.org, you will be able to watch up to 60 meteors per hour at the peak of the celestial event.

Want to know how to capture a meteor shower using a basic entry-level DSLR or mobile phone with PRO mode? Read on.

IndiaToday.in caught up with photographers Nimit Nigam and Shikhar Gupta, who are currently in the Spiti Valley to document the Perseid meteor shower.

A data engineer by profession, Shikhar Gupta, loves to travel to pristine skies to escape the city lights. He has been pursuing deep-sky photography (a division of astrophotography ) for the last one year now. The Lucknow-based photographer loves capturing the night sky including star trails, meteors and the Milky Way. A night where more 400 streaks of dust lit up across the sky, putting up a show like no other during Geminid meteor shower in December, 2020. (Photo: Shikhar Gupta)

IndiaToday.in spoke to the two to find out their suggestions on how to shoot the Perseid meteor showers. These tips will be helpful for beginners with an entry-level DSLR camera as well as those using point-and-shoot cameras and/or smartphones in PRO camera mode.

Where to photograph meteor showers?

Those looking to capture Perseids should find a dark spot away from bright lights with a wide-open view all around, said Nimit Nigam.

If it is a clear sky, you don’t need any equipment and you can watch the beautiful meteor shower with naked eyes.

Find an open clear sky, lay down, and don’t focus on the radiant particles as meteors will be all across the sky, said Shikhar Gupta. If you don’t have a tripod, then make sure you put your camera on something around you to give it some height.

“If you are in a city and have some spot where a good part of the sky is visible away from light pollution then you are in for a treat as there is nothing better than that,” he said.

Another tip would be to let your eyes adapt for 10-15 minutes to the darkness and avoid exposure to any bright lights, to see the most and the faintest streaks.

Nimit Nigam said that good images can be captured by an entry-level camera and kit lens as well. He added that smartphones are also capable of producing decent astro-photographs.

Shikhar Gupta echoed the same thoughts. “What you need is the widest lens possible free from major defects… if you are using a crop body then 11-16 is a good lens and if it is a full-frame then 16-35 or 14mm, basically the wider the better,” he said. 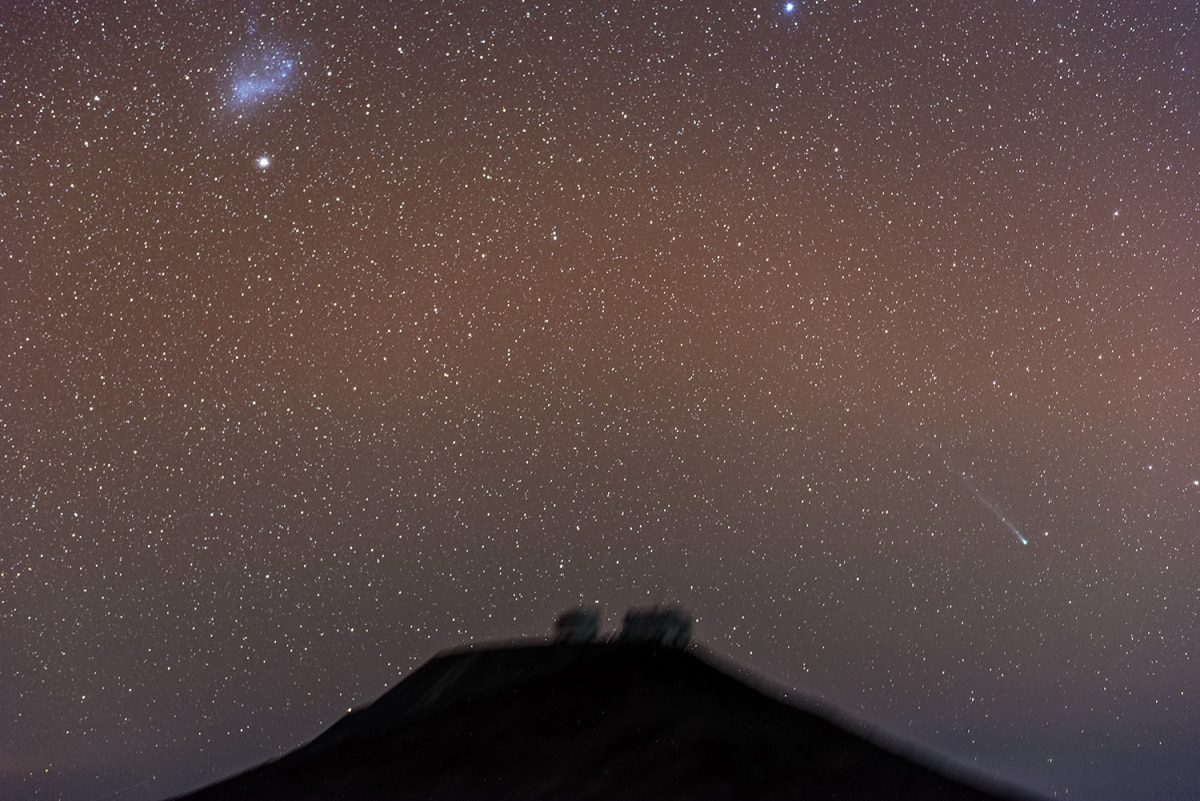 Night time means long exposures which means your camera’s sensor will be used for a longer period of time and hence it will be a drain for batteries.

Those who don’t have these lenses can make use of any wide lens that they have including the 24-70 mm.

“Try to get the widest aperture like f 2.8 or 1.8 but some lenses have defects at their widest open aperture so for example Nikon’s 50 mm lens (older one) gives balloon-like stars at f 1.8. That’s why I suggest shooting at f 2.8 and if you are using your kit lens then use the widest possible f stop or f 3.4 or f 4, whatever your lens supports,” added Shikhar Gupta.

ISO depends on the sky and the camera body as well. For beginners, ISO is your camera’s sensitivity to light.

ISO gives a lot of noise so a good starting point would be 1600-3200, suggested Shikhar.

“I usually shoot somewhere between 1600-6400 and I generally don’t go higher than that,” he added.

In terms of shutter speed, there are different ways to calculate the right exposure. 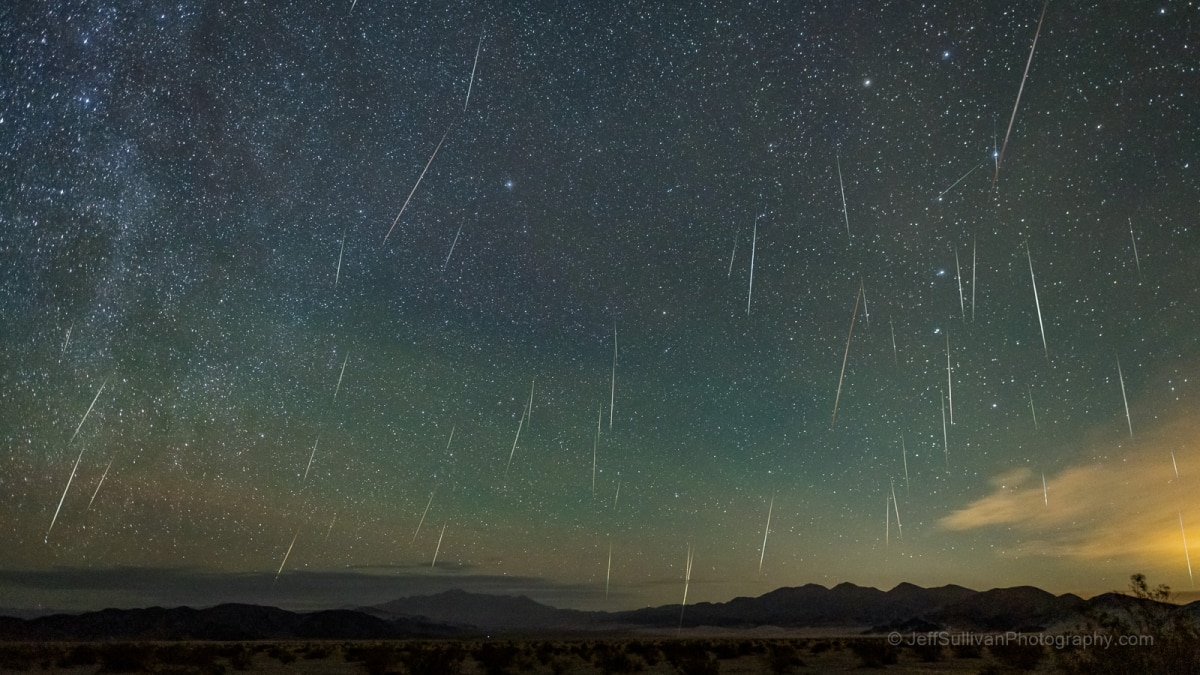 Another tip would be to let your eyes adapt for 10-15 minutes to the darkness and avoid exposure to any bright lights, to see the most and the faintest streaks. (Photo: Jeff Sullivan Photography)

Shutter speed depends on the focal length of the lens. For beginners, Nimit Nigam suggests the 500 rule for setting the shutter speed: “For example, if you are using an 11 mm lens on a crop body then, 500 divided by 11*1.6,” he said.

To get sharper stars and if you are using a wide enough lens then maybe a better way to calculate shutter speed would be to divide with 300, Shikhar added. This method will give you much better stars even on zooming in, he said.

Use inbuilt intervalometer mode or shutter release cable. You can also use mobile applications to time your shots which are usually specific to cameras.

Even though the camera will cover a large area of sky, it won’t be able to capture fast meteors or very faint meteors.

Shikhar added that a good rule of thumb would be to shoot a timelapse and use an intervalometer. In this case, it is better to shoot 50-200 images in order to get decent bright meteors.

Sturdy tripod and focus to infinity

Use a good sturdy tripod to get a sharp photo of a meteor. Meteor photography can’t be done with a handheld camera as it requires long exposures.

If you don’t have a tripod, then make sure you put your camera on something around you to give it some height. Keep checking at regular intervals though.

Setting your focus to infinity can be very tricky in the dark. You can focus on a bright star. Remember that getting accurate infinity focus is very important to get sharp photos, said Nimit Nigam.

Consider watching before and after the peak as well: It is generally observed that people document meteor showers only on the peak days. Undoubtedly, the peak days are typically your best shot to document the sky speckled with bright meteors. However, the week before or after peak days will also produce meteors. Typically, meteors, which originate from streams of debris left behind in space by comets, last weeks and not just on particular peak days.

Night time means long exposures which means your camera’s sensor will be used for a longer period of time and hence it will be a drain for batteries.

“Don’t forget to go for the shoot with a fully charged battery and bring spare ones as well,” said Nimit Nigam. Use inbuilt intervalometer mode or shutter release cable. You can also use mobile applications to time your shots which are usually specific to cameras.

Another important thing to keep in mind is the memory card. Your memory card should have a fast enough write speed. Otherwise, you would have to change memory cards during the timelapse. And you can end up capturing a giant fireball meteor, warned Shikhar Gupta.

Shikhar also suggested shooting RAW and not JPEG. A RAW image is an image file that will contain unprocessed or minimally processed data from a digital camera’s sensor.