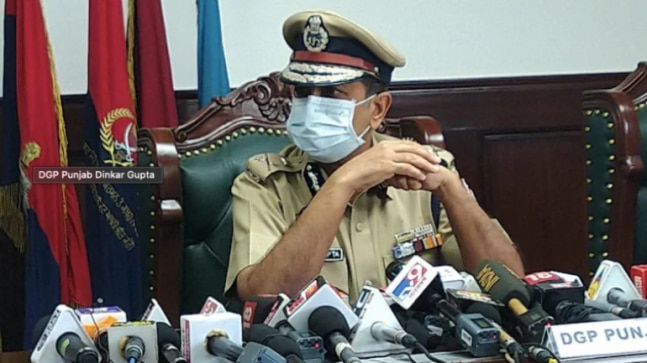 Punjab Police said on Monday that the state was on high alert after a tiffin box bomb packed with over 2 kg of RDX was recovered from a village in Amritsar which they suspect was dropped by a drone flying in from Pakistan.

Director General of Police Dinkar Gupta said the bomb could be set off through a remote device or a timed mechanism.

“The tiffin box bomb can be described as an Improvised Explosive Device. The IED was created in a double-chambered tiffin box with attractive pictures on it. Last evening, the recovery was made near Dalake village under Lopoke Police Station in Amritsar,” Gupta told media persons.

“Our assessment is that this bomb has been delivered through a drone across the border,” he added.

According to police, some hand grenades and cartridges were also found from the bag containing the tiffin bomb days ahead of Independence Day.

The DGP said a former village sarpanch of Bachiwind had informed police about some drone movements in the area.

Punjab Police is conducting searches in several border villages after the explosives were found.

The tiffin bomb had a switch mechanism and could provide a timed explosion. It also had a magnetic mechanism with two U-shaped magnets and a printed circuit board which can help in remote signal.

This was to be used, maybe for a high-value target. However, it cannot be said at this stage whether the explosives were to target any top political leader or meant for some other place and Punjab was just a transit state, he said in while replying to a question.

“This is a very sinister development. A lot of pistols, hand grenades have been seized over the last five years,” he said, adding the threat posed by drones has emerged as a major security challenge.

“Whether it is BSF or other agencies, they are making efforts and everyone is alive to this threat from drones, which is the most potent threat at this time,” he said, adding that the Punjab Police was “working closely” with the NIA and BSF.

According to the DGP, police found an abandoned bag that had seven pouches, a plastic tiffin, five hand grenades and 100 rounds of 9 mm pistol rounds, an explosive substance weighing over 2 kg, a remote control device and a switch.

A power energiser of 9 volts and three detonators were also found from the bag and the bomb was packed in foam packing, he added.

The Punjab Police is taking the help of the National Security Guard (NSG), who have said it is a sophisticated bomb and has about 2-3 kg of RDX explosive.

“In the last two to three months, there has been increased activity from across the border. There is a lot of pressure on militant outfits, and anti-national elements to do something around Independence Day and this is in the notice of Punjab Police and central agencies involved in counterterrorism efforts,” he said.

These are worrisome developments, the DGP said, while appealing to the public to remain alert at all times and report to the police if they find any suspicious item lying abandoned or unclaimed anywhere, including in trains, buses or restaurants.

Meanwhile, an FIR has been registered under provisions of the Arms Act, and the Explosive Substances Act at the Lopoke Police Station Amritsar.

Replying to a question, the DGP said Punjab Police has busted several terror modules and made huge recoveries of weapons in wake of the terror attacks in Gurdaspur and Pathankot in 2015 and 2016 followed by targeted killings in 2016-17.

A few months ago, 11 hand grenades dropped by a drone flying in from Pakistan were seized near the International Border in Punjab’s Gurdaspur district.

The first incident of dropping of arms and weapons through drones from Pakistan came to light in Punjab in September 2019 when police recovered AK-47 rifles, magazines and rounds of ammunition, hand grenades, fake currency and other items in Tarn Taran district.

In a separate development, the DGP said of the 31 ”A” category gangsters from the state, 20 have been arrested, 7 neutralised in different operations, and two are in Europe.

Their networking and linkages are a “matter of security concern”, he said.