A resurgent wildfire burned homes north of Athens and blazes across southern Greece forced more evacuations Thursday as weather conditions worsened and firefighters in a round-the-clock battle fought to save a former royal palace and the birthplace of the ancient Olympics.

In a dramatic scene as flames approached, fire crews went house to house to escort residents out of homes some 20 km (12 1/2 miles) north of the capital. The fire threatened the power supply to parts of the capital after damaging the transmission network, officials said.

Greek and European Union officials described the huge fires as a consequence of climate change. Fuelled by the worst heat wave in decades, the fires drew closer to a summer palace at Tatoi outside Athens once used by the former Greek royal family, as well as an archaeological site in southern Greece that was the birthplace of the ancient Olympics.

“Our priority is always the protection of human life, followed by the protection of property, the natural environment and critical infrastructure. Unfortunately, under these circumstances, achieving all these aims at the same time is simply impossible,” Prime Minister Kyriakos Mitsotakis said in a televised address late Thursday.

The wildfires, he said, display “the reality of climate change”. Earlier, he visited Tatoi as well as Ancient Olympia, where flame lighting ceremonies for the modern summer and winter Olympics are held every two years. 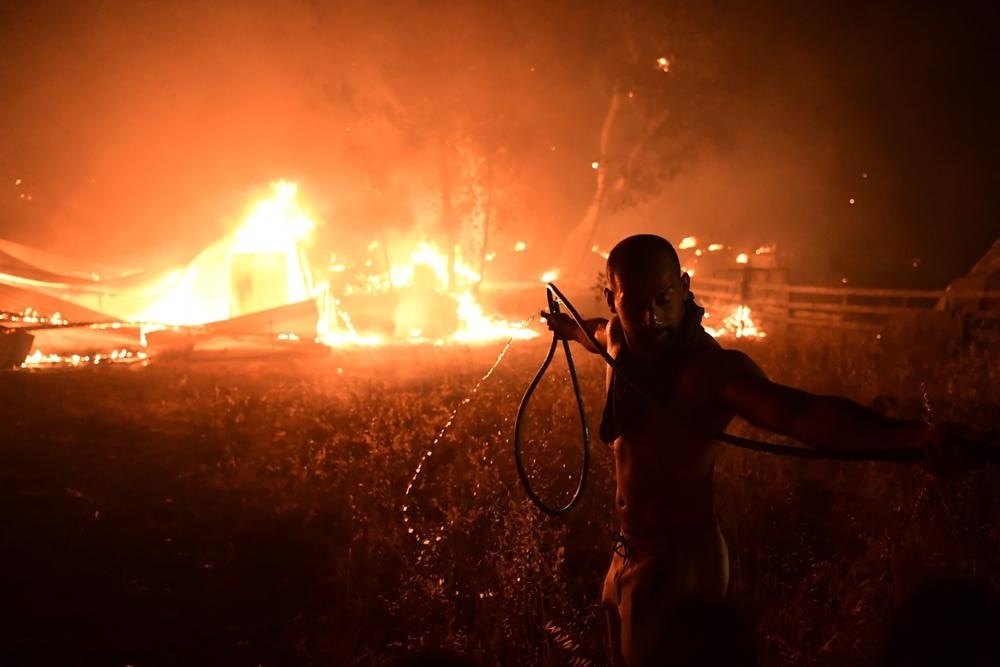 A man uses a water hose during a wildfire in Adames area, in northern Athens, Greece.

As additional support arrived from Greece’s military and EU countries, water-dropping planes and helicopters swooped over blazes near the capital, in central Greece, on the island of Evia, and near Ancient Olympia to the south. Dozens of villages and settlements were evacuated, including a beachside campsite and hotels on Evia, where boats were used to transport stranded vacationers to safety.

A heat wave baking southeast Europe for a second week has also triggered deadly fires in Turkey and Albania and blazes across the region.

North Macedonia’s government on Thursday declared the country in a state of crisis for the next 30 days due to wildfires.

The EU Commissioner for the environment, Virginijus Sinkevicius, said the fires and extreme weather globally over the summer were a clear signal for the need to address climate change. 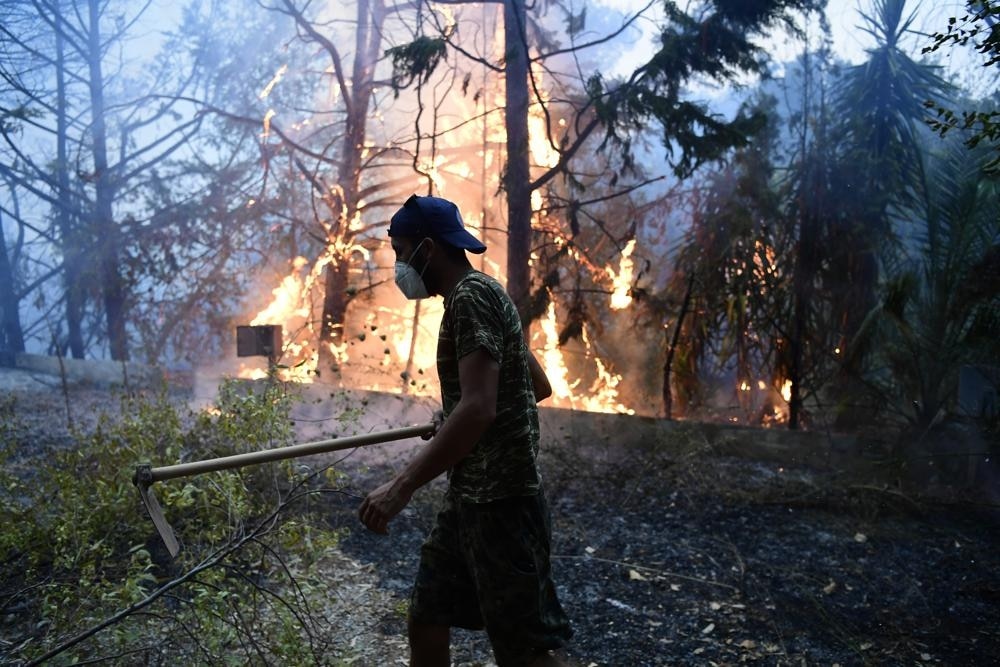 Thousands of people fled their homes north of Athens on Tuesday.

“We are fighting some of the worst wildfires we’ve seen in decades. But this summer’s floods, heatwaves and forest fires can become our new normality,” he wrote in a tweet.

“We must ask ourselves: Is this the world we want to live in? We need immediate actions for nature before it’s too late.”

Greece’s Civil Protection Agency said the risk of fires across southern Greece would increase further Friday, with windy weather forecast for parts of the country, despite an expected slight dip in temperatures that reached 45 degrees Celsius (113 Fahrenheit) earlier this week. The heat wave was described as Greece’s worst since 1987. Defence Minister Nikolaos Panagiotopoulos said the armed forces would expand their role in fire prevention, with ground patrols, drones, and aircraft over areas vulnerable to wildfires.

Outside Athens, a forest fire that broke out on the northern fringes of the capital Tuesday and damaged or destroyed scores of homes rekindled, triggering fresh evacuations, threatening homes and sending thick smoke over the capital.

The EU Atmosphere Monitoring Service said smoke plumes from the region’s wildfires were clearly visible in satellite images, adding that the estimated intensity of the wildfires in Turkey was at the highest level since records started in 2003.

On the island of Evia, a major fire that broke out Tuesday was ravaging forests, leading to the evacuation of villages and a camping site, sending people fleeing in cars and by sea. Police and fire block a road as smoke billows from a forest fire in Varibobi area, northern Athens, Thursday.

The fires have not caused any deaths or serious injuries in Greece. But Greek scientists said the total destruction in just three days this month exceeded 50% of the average area burned in the country in previous years. An Athens Observatory report said an estimated 6,000 hectares (14,800 acres) went up in smoke between Sunday and Wednesday, compared to 10,400 hectares in the whole of last year.

The causes of the Greek wildfires were unclear, but authorities say human error and carelessness are most frequently to blame. Bulldozers open fire break at a forest during a wildfire near Kechries village on the island of Evia, about 144 kilometers (90 miles) north of Athens, Greece.

However, arson was suspected in the blaze near ancient Olympia, with officials noting that seven fires broke out in quick succession in the region on Wednesday.

The mayor of the local town of Pyrgos, Panagiotis Antonakopoulos, told Open TV that one person had been spotted moving suspiciously in nearby woodland on a motorbike, stopping every so often and a fire breaking out shortly after his stops. The person, he said, had not yet been arrested.