On August 9, Sanjay Leela Bhansali completed 25 years in the film industry. SLB’s first directorial debut, Khamoshi: The Musical, released in theatres on August 9, 1996. Yesterday, many Bollywood celebrities took to social media to congratulate the ‘magician’ on his special day. While Deepika Padukone shared a long, emotional note for SLB, Alia Bhatt posted a behind-the-scene picture with SLB from their upcoming film Gangubai Kathiawadi.

Deepika shared a montage of SLB’s films and shared details about her journey of becoming a ‘SLB muse’. The actress has worked with the director in Goliyon Ki Raasleela Ram Leela, Bajirao Mastani and Padmaavat.

Her note read as, “9th November 2007. My debut film Om Shanti Om was pitted against Sanjay Leela Bhansali’s Saawariya. And as grateful as I was (And I still am…I cannot think of another female actor who has been launched in the same manner as I was), I also remember thinking to myself at the time, that I would never be good enough…to be a Sanjay Leela Bhansali muse.

“Fast forward to 2012. I was extremely unwell and laid up in bed. I received a call from my management saying ‘Sanjay Leela Bhansali wants to meet you.’ I said, ‘What?!’. They said, ‘Yes! He is doing a film and would really like to meet you.’ ‘I would do cartwheels to go and see him right away, but I can’t get out of bed right now!’ I said. The next thing I know, he was on his way to see me!

“What ensued in the years that followed was nothing short of an ‘iconic partnership’ I believe. And together we’ve created ‘iconic characters’. Characters that have been etched in the minds and hearts of people forever! What I cherish even more though, is the influence our collaboration has had on me personally. I say this without a shadow of a doubt that I wouldn’t be half the person I am today if it wasn’t for Sanjay Leela Bhansali!

“As he embarks on the next phase of this most incredible journey, I look forward to creating many more memorable and iconic characters together, but more importantly, I wish him good health, peace of mind, and happiness…always!” 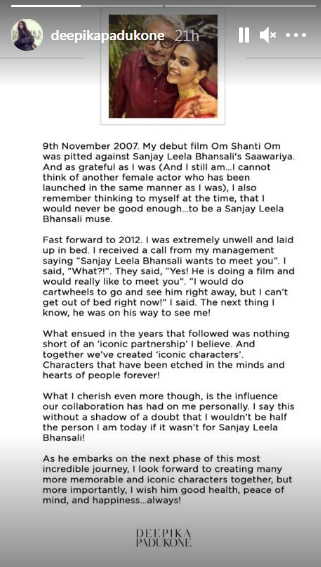 Ranveer Singh wrote, “My bond with SLB is very deep. I have done my best work with Him. He is a master of his craft and a true artist. Whenever you are directed by him you have a tremendous growth spurt as a performer. He challenges you, he pushes you to deliver a performance that’s visceral, spirited and comes from a place deep within you. He enriches and inspires you. He nurtures his actors and extracts their very best performances. Working on an SLB film puts you in a creative flux, and after the process you feel like an evolution has occurred within you. He has an ability to raise the stakes of the conflict in shooting a film scene, such that achieving that gold standard, that degree of excellence often feels like moving target, and he makes you feel like hitting that target is a matter of life and death.

“Sometimes It feels as if you are at war with your self – at war with the limitations and boundaries you’ve become comfortable within. He pushes you forth in a way that propels you and ensures that you win this hard-fought battle with your own constructs. I feel he truly expands your bandwidth as a performer, because he compels you to find new depths within yourself and he shows you new lengths that you can go to in order to achieve your own personal moment of artistic authenticity and cinematic magic. This essentially makes your repertoire as a performer much deeper and your range and bandwidth much wider. You become addicted to the magic he manages to concoct time after time. (1/2) #25YearsOfSLB #SanjayLeelaBhansali @bhansaliproductions (sic).”

Ajay Devgn wrote, “Hey Sanjay, Congratulations on your silver jubilee. Your contribution to films is unparalleled. And, I love working with you because your passion & dedication is infectious. Will keenly await several more milestones that are meant for you (sic).”

Hey Sanjay,
Congratulations on your silver jubilee. Your contribution to films is unparalleled. And, I love working with you because your passion & dedication is infectious. Will keenly await several more milestones that are meant for youhttps://t.co/uOc1OWiIGG@bhansali_produc

After belting out films like Devdas, Black, Khamoshi, Goliyon Ki Raasleela Ram-Leela, Padmaavat and more, Sanjay gearing up for the release of Gangubai Kathiawadi. He also has Baiju Bawra in the pipeline.