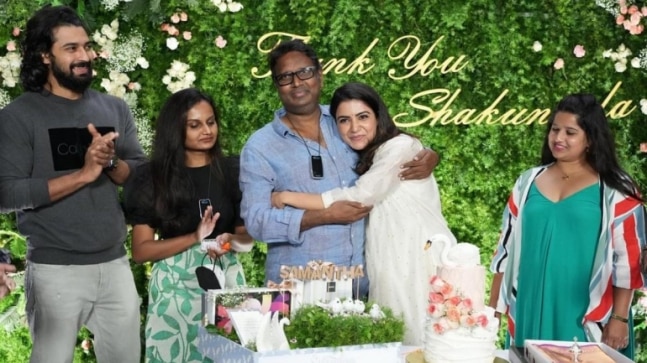 On Thursday, August 12, Samantha Akkineni wrapped up Shaakuntalam shoot. She thanked director Gunasekhar for creating such a beautiful film and the entire cast and crew for helping her every step of the way. Samantha Akkineni thanks director Gunasekhar for giving her a film like Shaakuntalam.

Samantha Akkineni, who resumed shooting for Gunasekhar’s Shaakuntalam on June 28, took to Instagram on Thursday, August 12, to announce that the film’s shoot has been wrapped up. In her post, the Majili actress thanked her director Gunasekhar for giving her the opportunity to relive her fairytales through Shaakuntalam and for being her fairy godfather. She also thanked her costume designer Neeta Lulla, co-star Dev Mohan and the entire cast and crew of the film for making it a success.

Samantha Akkineni, who plays Shakuntala in Gunasekhar’s Shaakuntalam, took to Instagram on Thursday, August 12, to bid goodbye to the cast and crew of the film after wrap. The Ye Maaya Chesave actress shared an adorable picture with the director from the wrap party and penned a beautiful note thanking everyone on set for lending a helping hand to her throughout the shoot. She thanked her director for creating the world of Shaakuntalam and giving her the opportunity to be a part of it. She also thanked designer Neeta Lulla for putting her heart and soul into the film.

Sharing the picture, Samantha wrote, “And it’s a wrap on Shaakuntalam !! This film will stay with me for the rest of my life. As a little girl I believed in fairy tales .. not much has changed. I still do …. and @gunasekhar1 sir my fairy godfather making my dream a reality. When he narrated this film to me I was immediately transported to a most beautiful world .. the world of Shaakuntalam.. a world like no other (sic).”

Directed by Gunasekhar, Shaakuntalam narrates the mythological tale of King Dushyanta and Shakuntala, daughter of sage Vishwamitra and apsara Menaka. Starring Samantha Akkineni as Shakuntala and Malayalam actor Dev Mohan as Dushyanta, the film will be produced by Neelima Guna under the Gunaa Teamworks banner. Allu Arjun’s daughter Arha will make her acting debut in the film as Prince Bharat. Based on Kalidasa’s epic Sanskrit play Abhijnana Shakuntalam, the film has garnered intrigue among fans, who are waiting for the teaser of the film. Neeta Lulla has designed the costumes for Samantha and Arha in the film.