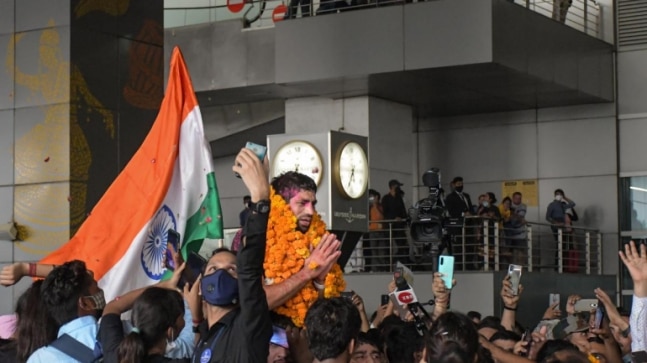 Ravi Kumar Dahiya won silver on Olympic debut in Tokyo and was carried on people’s shoulders upon arrival at New Delhi airport on Monday. Ravi was hoisted on people’s shoulders at the New Delhi airport. (PTI Photo)

Olympic silver medal-winning wrestler Ravi Kumar Dahiya said that he saw Sushil Kumar and Yogeshwar Dutt when he was a young wrestler at the Chhatrasal Stadium in New Delhi. Sushil won India’s first medal in wrestling in over five decades at the 2008 Beijing Olympics and went on to win silver at London 2012 while Yogeshwar won a bronze in London.

Ravi was among the Indian athletes who won medals at the Tokyo Olympics and were felicitated by Sports Minister Anurag Thakur upon return to New Delhi. He was carried on people’s shoulders when he arrived at the New Delhi airport.

“I started from mud wrestling and from there I came to Delhi, to the (Chhatrasal) stadium,” said Ravi at the felicitation ceremony.

“I saw so many great champions right in front of me. In 2008 when I arrived at the stadium, Sushil Kumar won the medal. In 2012, Yogeshwar Dutt and Sushil both won. I saw that they were getting so much respect and I felt so happy seeing that. I felt I also want to do something like that. I saw them and move forward and today I am standing here and I would like to thank all of you for that,” said Ravi.