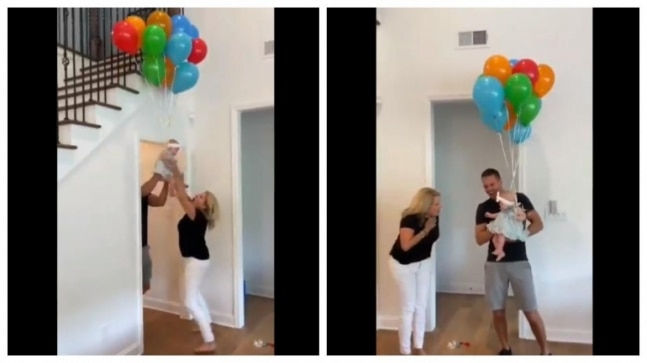 This particular woman also behaved in the same manner as she frantically tried to save the baby but realised that it was a prank (Phew!).

The 8-second long clip features a woman frantically running towards a baby who is seen floating in the air with balloons tied to her back. “Emerson, oh my God! Get her,” screams the woman as she rushes to rescue the baby.
However, as soon as she gets hold of the baby, a man appears from behind revealing the prank, that it was he who was holding the baby and not the balloons.

The baby is flying! pic.twitter.com/5YiFEH5qHt

The video has garnered over 6 million views and has gone viral on the microblogging site. Some users found the video hilarious, while several quarters weren’t absolutely impressed with the clip.

“Some people really should not be parents,” a user said. Another comment reads, “It’s a joke that I can’t laugh at when I think about my mother’s feelings.”

The internet, is basically, divided over the video.

I feel for the mother. I would’ve been so scared too! It’s a prank, good execution but come on man, you don’t do that to mothers man! Just don’t, it’s very cruel

That was so funny pic.twitter.com/sWX3xN3IG7

C’mon people — no one has a sense of humour anymore. Baby was literally in good hands of a great dad.

This might have been funny in 1950. Today, let’s just call Child Protective Services.

Dads are always the fun parents

That’s enough to give someone a heart attack.

This is classic! He pulled it off perfectly! Hilarious!

Now that made my day, its very funny.

Some people really should not be parents.

OMG I had a mini cardiac arrest

What do you think?