The TMC said it would go ahead with the original plan of celebrating ‘Khela Hobe Divas’ on August 16 after West Bengal Governor Jagdeep Dhankhar appealed to Mamata Banerjee to reconsider the plan. 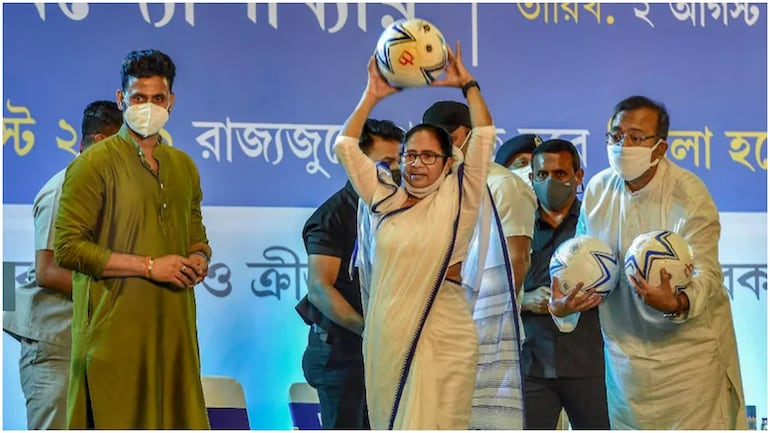 The TMC has decided to go ahead with the plan of celebrating the ‘Khela Hobe Divas’ on August 16 by distributing 50,000 footballs to 25,000 clubs across the state. (Photo: PTI)

Politics over ‘Khela Hobe Divas’ continues with the Trinamool Congress (TMC) saying it will go ahead with the original plan of celebrating it on August 16 after West Bengal Governor Jagdeep Dhankhar appealed to Chief Minister Mamata Banerjee to reconsider the plan.

The governor’s appeal came after around fifty monks from various Hindu organisations met him on Tuesday saying that the date coincides with the Direct Action Day in 1946 when several Hindus were killed in communal atrocities.

Peace and harmony are vital to flourishing of democracy. All steps that have potential to generate divisiveness in society must be contained. Expect @MamataOfficial to rise over partisan stance and take urgent call as regards date #KhelaHobe with public interest in mind.

The BJP has hit out at the TMC over the ‘Khela Hobe Divas’, saying West Bengal’s ruling party should consider the people who died in 1946. The saffron party also asked the TMC to be sensitive to the sixteen football fans who lost their lives in a stampede during a Calcutta Football League match between rival clubs Mohun Bagan and East Bengal on August 16, 1980.

Senior BJP leader Rahul Sinha asked, “Why should ‘Khela Hobe Divas’ be celebrated on August 16? More than 10 people died at a football match between two clubs. Secondly, more than 10,000 Hindus died on August 16 1946. Why should the TMC celebrate Khela Hobe Diwas on the same day? Do they want to remind people of the atrocities?”

The TMC countered, asking why a pre-independence event of 1946 should be remembered while calling BJP’s concerns a “political gimmick”. The TMC has decided to go ahead with the plan of celebrating the ‘Khela Hobe Divas’ on August 16 by distributing 50,000 footballs to 25,000 clubs across the state.

“Their going to the governor was a political gimmick and it is a government decision which does not need to be changed,” said TMC leader Shobhandeb Chattopadhyay.

On Tuesday, BJP leader Suvendu Adhikari, who is the Chairman of Trustees of Jagannath Temple Mechada, also visited Jagdeep Dhankhar along with the monks.