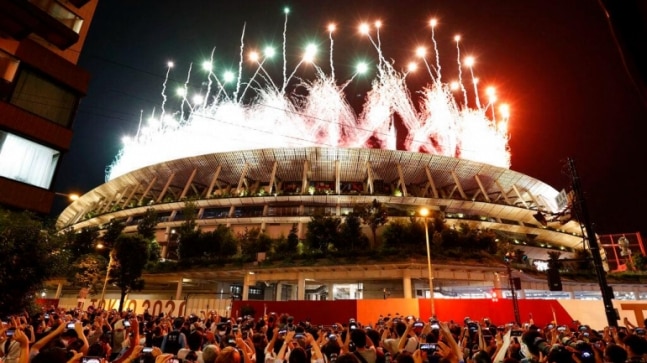 When the Tokyo Olympics began during a worsening pandemic in Japan; the majority of the host nation was in opposition, with Emperor Naruhito dropping the word “celebrating” from his opening declaration of welcome.

But as soon as the Games got underway and the local media overnight switched to covering Japanese athletes’ “medal rush,” many Japanese were won over.

They watched TV to cheer on Japanese athletes in an Olympics that ended Sunday with a record 58 medals for the home nation, including 27 gold.

“Having the games in the middle of the pandemic didn’t seem like a good idea, and I did wonder if they should be canceled. But the medal haul was very exciting and stimulating. Once the Games started, we naturally cheered the athletes and simply enjoyed watching them”, said Keisuke Uchisawa, an office worker.

His wife Yuki, a medical professional, was especially worried about the pandemic. However she noticed patients at her hospital beaming as they watched the Games. “I saw the power of sports, and I thought it was wonderful,” she said. “Athletes made outstanding performances, and we wanted to cheer for them.

While there are still worries that Japan will pay a price for hosting these Games; recent days have seen record numbers of virus cases. But for now, among many, a sense of pride and goodwill is lingering. During the Olympics, the downtown stores that were almost empty before the Games, were now crowded on a recent weekday toward the end of the Olympics. Many customers appeared to be workers from the neighborhood dropping by during lunch breaks.

Initially a lot of Japanese expressed reluctance or opposition to holding the Olympics during a pandemic that, for them, was worsening. A series of resignations of Olympic-linked officials over sexism, past bullying and Holocaust jokes also hurt the Games’ image ahead of the July 23 opening. There were protests on Tokyo streets and on social media

After the opening ceremony, however, many opponents started to cheer. More than half of Japan’s population watched the event, according to rating company Video Research — the highest rating for an Olympic opening ceremony in Japan since 61% for the 1964 Tokyo games, a time when far fewer people had televisions. Outside the National Stadium, where dozens of demonstrators regularly held anti-Olympic rallies, many fans stood in a line next to the Olympic rings waiting to take selfies, since, it was the closest they could get to spectator-free stadiums

Japanese Prime Minister Yoshihide Suga, criticized for insisting on hosting the Olympics despite the virus, was likely hoping for this evolution in sentiment. He has been trying to reverse nose-diving support ratings for his government ahead of general elections expected in the autumn. He has repeatedly said there is no evidence linking the upsurge in cases to the Games — and, in fact, barely more than 400 positive cases were reported inside the Olympic “bubble” from early July until the closing ceremony

There are still worries that Japan will pay a price for hosting these Games; recent days have seen record numbers of virus cases. Medical experts have raised alarms as virus infections accelerate in Tokyo; daily cases surged to new highs during the Olympics. On Aug. 5, Tokyo logged 5,042 cases, an all-time high since the pandemic began early last year. Experts say the ongoing infections propelled by the more contagious delta variant could send the daily caseload above 10,000 within two weeks

But for now, among many, a sense of pride and goodwill is lingering. Yoko Kudo, a teacher said “I hope, at least the rest of the world will thank Japan for achieving the Games despite the difficulties.”